He hasn't seen much sun lately. 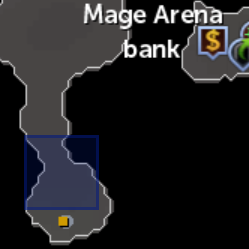 The Chamber guardian is found in the small cave section of the Mage Arena. He operates the Mage Arena Staves store that sells god staves for 80,000 coins. To reach him, players need to jump into the sparkling pool.

After players have completed the Mage Arena activity, they are rewarded with either a Saradomin staff, Guthix staff or Zamorak staff by the chamber guardian, depending on which god cape players chose. Note that he does not buy god staves back from players.

Retrieved from "https://runescape.fandom.com/wiki/Chamber_guardian?oldid=24563736"
Community content is available under CC-BY-SA unless otherwise noted.