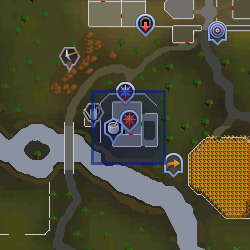 The Champions' Guild is a building located south-west of Varrock, and is accessible to those with 33 quest points or more. It is home to Scavvo's Rune Store, Valaine's Shop of Champions, and Marvellous Mysticysm, and is also the start point of the well-known free-to-play quest Dragon Slayer.

Members can reach the Guild directly with a combat bracelet, which teleports them right outside the front door. Alternatively, the Canoe transport system deposits both members and free players just outside the Guild, next to the riverbank. The Varrock lodestone is also nearby. Before the removal of PvP worlds, the Champions' Guild was the only guild for free players to permit player combat.

The adventurer Xenia was one of the guild's founding members.

The front door opens into a large foyer that houses the Guildmaster, who will welcome players when they enter. Players can talk to him to start the Dragon Slayer quest. This room also contains a staircase to the first floor, a table with chairs on opposite sides, various decorations on the wall, and a trapdoor that leads to Champions' Challenge, a Distraction and Diversion only for members. The ground floor also includes a second, smaller room to the south, which contains a range.

On the east side is an area containing chickens. This is a very good spot to start training at a low Cooking level. Players can fight the chickens and then cook their meat on the range nearby. They can then eat, drop or bank the cooked chickens and repeat, or sell them to Valaine upstairs. This is also one of the best places for non-members to train Prayer for the low amount of people and a large number of chickens. Players can also use the feathers for Fishing or Fletching. The chickens can only be attacked from within the Guild.

Xenia, one of the founders of the guild, and the other Signature Heroes are found sitting near the table. Whenever you enter the ground floor, Ozan would play a short song before the music player continues.

The first floor is one big room with three non-player characters and various decorations. The three NPCs all sell items. One is on the north side of the room, another is on the south side. There is also a chest which players can search to find gloves, leather boots, and some coins.

In RuneScape Classic, there was a one way exit from the upper floor—an emergency exit ladder in the south-west corner could be climbed down to the outside, and could not be climbed up.

Scavvo runs Scavvo's Rune Store. Players can purchase rune armour and rune weapons from him. In the past, many of the rune items were often sold out and took a long time to restock, after a Shop Improvement update, there were unlimited items in Main Stock. A further update reverted it back to a limited stock.

Valaine runs Valaine's Shop of Champions. She runs a general store shops, allowing players to sell any item to her. She sells a variety of tier 50 ranged gear.

Early on in RuneScape Classic, the only way to obtain a blue cape was to buy one from Valaine for 41 coins, and were thus worn as a symbol of accomplishment. It also gave one more point to defence than the other F2P capes.

The basement is only accessible to members. Located in the basement is the Champions' Challenge Distraction and Diversion. Strong creatures representing their race sit around the edges of an arena where players can fight against champions of certain races. The champions can only be challenged with a Champion's scroll, which is an extremely rare drop from thirteen different races of monsters.

There is a teaser challenger in the basement, the Leprechaun Champion, whom all players can fight without a Champion's scroll.[1]

The player also becomes a member of the guild, after Dragon Slayer.

Retrieved from "https://runescape.fandom.com/wiki/Champions%27_Guild?oldid=24533384"
Community content is available under CC-BY-SA unless otherwise noted.