Looks down on his luck. 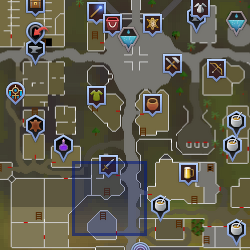 Dimension of Disaster: Shield of Arrav

Looks down on his luck.

Charlie the Tramp, full name Charles Lyeman and also known as Charles E. Trampin, is a tramp who is found right next to the southern entrance to Varrock, at the end of the alleyway to the Black Arm Gang's headquarters. He tells players about the Black Arm Gang headquarters during the Shield of Arrav and Dimension of Disaster: Shield of Arrav quest.

He appears to be wearing villager sandals.

He stars in one of Meg's Cases: Charlie's missing sleeping bag

Nederlands
Community content is available under CC-BY-SA unless otherwise noted.
... more about "Charlie the Tramp"
RDF feed
Is members only
No +
Store location
Varrock +
Advertisement