Chef's Assistant is a quest that was released on 11 February 2019.

To start this quest, enter the Cooking Guild and ask the Head Chef for a quest. Accept and he'll tell you he wants to be the new leader of the Cooks, Apprentices and Kitchen Experts Society by introducing a top secret groundbreaking new recipe: cheesecake. However, he can't make it without the main ingredient, cream cheese. He'll ask you to see Phil and Delphie, a couple located North of the Artisans Workshop.

Head to Falador via preferred transportation method (the lodestone is most convenient) and head to the highlighted area on your map. The building is directly north of the workshop, and is attached to a water source. Enter, and speak to either Phil or Delphie. They'll inform you that a) the recipe's not very secret and B) that their dairy churn has broken from overuse. But if you fix it for them, they'll show you how to make cream cheese.

You'll need basic logs and a steel bar to fix it. The churn is right next to their range. Click on it to fix it, then talk to Phil or Delphie again. They explain you just need to put milk in the now-repaired churn and churn it. Click on the churn and select cream cheese to make it. Return to the Cooking Guild.

Talk to the Head Chef again. You'll give him the cream cheese, and he'll ask for more ingredients: cream cheese, biscuits, and a cake tin. He'll also give you a list that includes instructions for biscuits. You need to combine flour and butter to make biscuit dough, and then bake it to make the biscuits. Talk to the Head Chef again when you have all the ingredients and he'll tell you to combine them. He'll give you instructions, but you can do it just by combining one ingredient with another.

Talk to him when the cheesecake is made, and he'll ask you to bring it to several members of the society. He'll give you a list of 3 people to see.

The list takes you to see 3 cooks. First on the list is Mess Sergeant Ramsey, located at The Pick and Lute pub in Taverly, located just east of the lodestone. He's in the back by the bar. Choose the dialogue option regarding the cake, and he'll give you his vote.

Next is the Cook in Lumbridge. He's in the castle kitchen, west of the lodestone. Offer him the cheesecake, and he'll also give you his vote.

Last is the Cook of the Jolly Boar Inn, located at his namesake inn. It's right next to the Lumber Yard, making it arguably the most inconvenient cook to reach. He's in the southeast corner, in the kitchen. Talk to him to give him some cheesecake, and he'll give you the third vote.

Return to the Cooking Guild and speak with the Head Chef. He'll tell you he got voted in as the new leader and thank you. 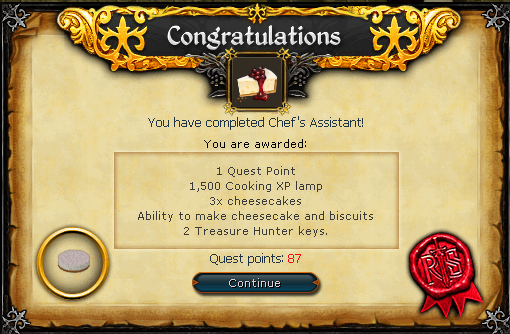