RuneScape Wiki
Register
Don't have an account?
Sign In
Advertisement
in: Items that are always kept outside the Wilderness on death, Untradeable items, Items that cannot be disassembled,
and 8 more

You can get another vexillum at the clan scribe.

A vexillum declaring a clan.

The clan vexillum is an item similar to the previously released Flagstaff of festivities. It can be obtained from the Clan Scribe at the Clan Camp and is the wieldable counterpart to the Clan cloak. Wielding it shows the logo of the clan of which the player is currently a member, and any placed vexillum will display all current clan information when looked at by players. It has stats identical to a bronze longsword. Players can give the vexillum to another clan member by using it on them.

Stands for the vexillum only exist in the Clan Camp and Burthorpe however they can be placed anywhere in the ground, except inside the Grand Exchange, banks, in another clan's Citadel or close to an Energy Rift. Furthermore, the vexillum can not be placed within 11 squares of another. The vexillum can be placed on the ground by right-clicking it in inventory or while wielding it. Clicking wield will retrieve it, as will clicking remove while it is placed. However, the vexillum will still be placed even if it is banked but only until the player is logged off, or about an hour, which is effectively the same as retrieving it. The vexillum may remain in a stand for up to 30 minutes or until the vexillum's owner leaves the area. Players can obtain an unlimited amount of vexilla.

The vexillum can teleport players to the Clan Camp and to the clan portal in the Tower of Voices an unlimited number of times. To do this, simply right-click it and choose teleport. This can be used for unlimited free teleports to Falador, as well as easy access to Prifddinas. However, this teleport will not work beyond level 20 Wilderness, or while in combat.

Vexilla can be edited by going to Clan Settings and clicking Motif. Two pictures and the colours can be chosen. Once satisfied, click Done.

The vexillum will be destroyed upon leaving a clan; to re-obtain the vexillum, the player must join a clan again.

The vexillum can tell members of the clan when certain events are occurring after editing notices on the noticeboard in your Clan Citadel.

Trophy vexilla are only available to clans that have reached tier 7 on their Clan Citadel.

A Clan vexillum tier 7 in a stand

A Clan vexillum in a stand

The interface you get when you click to read a vexillum

A detailed image of a vexillum stand

All the symbols you can have on your clan vexillum

A player teleporting with a clan vexillum 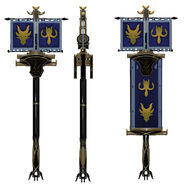