Start a Wiki
CS
This article is about the NPC from the Plague City quest. For the Grand Exchange NPC, see Grand Exchange clerk.
For the courthouse clerk, see Clerk (Court Cases). 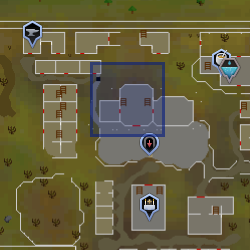 The Clerk is Bravek's secretary and he can be found in the Civic Office of West Ardougne. He plays a minor role in the day-to-day running of West Ardougne, mostly administering paperwork. In the Plague City quest, the player has to convince him to let the player see Bravek.

Retrieved from "https://runescape.fandom.com/wiki/Clerk?oldid=24562646"
Community content is available under CC-BY-SA unless otherwise noted.