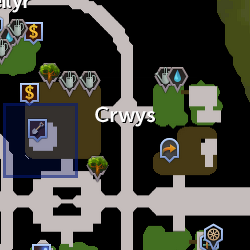 Coeden is an Ent found in the Crwys Clan district of Prifddinas, sitting on a rock inside a greenhouse that also contains some choking ivy for woodcutting. He runs a shop known as Coeden's Seed Store, which sells allotment, flower and hops seeds and wood and fruit tree seedlings. He doesn't reveal much about himself, but claims to be a friend of the Crwys Clan, and speaks very slowly, briefly pausing between each word he says.

During The Light Within the adventurer needs to retrieve a wintercup mushroom to make the Elixir of Revealment. When the adventurer asks him for this mushroom, Coeden tells them about a funny story during which the adventurer has to stay awake by clicking on the clan icons. Afterwards Coeden will give them the mushroom.

After completing the Tirannwn Tasks, players can persuade Coeden each day to give a combination of 28 elder, magic and yew logs. Players must have an empty inventory to receive the logs. The chosen dialogue option for persuading Coeden doesn't affect the outcome of the logs.

The following combinations of logs can be collected: