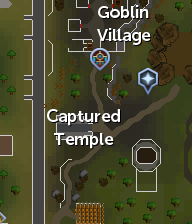 Wine of Zamorak is used to create super ranging potions and super Zamorak brew. It can be taken from the table in the Captured Temple by hand only if the six nearby Monks of Zamorak are dead, or by using Telekinetic Grab, which requires 33 Magic.

The temple is near the Falador lodestone and is closest to the Bandosian token's teleport, which is usable 10 times per day.

Picking the wine up by hand inflicts damage ranging from 5% to 10% of current life points (higher percentages at low life points) and reduces Attack, Strength, Defence, Ranged, and Magic levels by 5%-6%. In addition, the monks will attack whomever attempts to take the wine (even if using Telekinetic Grab), but running east pass Miazrqa wanders will immediately drop their aggro.

The 3-tick animation of Telekinetic Grab can be outdone by picking up the wine by hand, which takes only 1 tick and does not use law runes.

Resting, Sacrifice and ultimate Constitution abilities can be used to keep life points up in lieu of food. In particular, Rejuvenate can restore drained combat levels but cannot be used if you are drained below 52 Defence, in which case restore potions (which are cheap and also restore large amounts of any stat as well) may be used.

The nearby altar permits liberal use of Protect from Magic, Rapid Heal, Rapid Restore, and combat-boosting prayers, as well as the Amulet of zealots. Redemption might be used but mind the 1-minute cooldown.

The wine respawns every 30 seconds, and the monks each take 225 seconds to respawn (3 minutes and 45 seconds), so about 6 jugs of wine can be looted for each cycle of monks killed.

Banking can be done by running to Taverley, by way of Falador Teleport (bring a Water rune or a Tome of frost), the Burthorpe or Falador lodestones, the Skull of Remembrance, or the Ring of kinship. Moreover, lost levels can be quickly restored by entering a dungeon at Daemonheim.

Due to constantly changing prices on the Grand Exchange, some information in this article may or may not be current.
It is strongly recommended to check the live prices on the Grand Exchange before making large investments in any method.
All prices on this page are cached, meaning it is possible that they appear out of date.
To force a new cache of this page, click this link.
If a money making method is out of date, you can edit it or leave a message on the talk page.
Community content is available under CC-BY-SA unless otherwise noted.
Advertisement