A (semi) retired member of the Temple Knights. 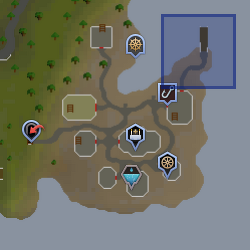 A (semi) retired member of the Temple Knights.

Colonel Jake O'Niall is a retired member of the Temple Knights, a highly secretive Saradominist organisation that has protected Gielinor for over 4,000 years. Despite being retired, O'Niall still has contacts within the Temple Knights and often plays small roles in missions.

Col. O'Niall plays a large role in the Slug Menace quest. After completing the quest, he can no longer be found in-game.

O'Niall was born in the year 117 of the Fifth Age within Draynor Village, a small agricultural community in southern Misthalin. For unknown reasons, O'Niall moved to the Asgarnian capital city of Falador not long after his birth. Here he joined the White Knights, a powerful military and political force that, at the time, had a strong rivalry with their grudging allies, the Kinshra.

O'Niall proved himself to be far above even the White Knights' standards after spending only a short time amongst their ranks. The Temple Knights, taking note of this, recruited O'Niall at age 15; an extremely young age for one to be recruited.

Despite having served for longer than most Knights, O'Niall was forced to retire after a classified incident. With his security clearance still active, he moved to Witchaven, a sleepy fishing community near the capital of Kandarin, East Ardougne. His retirement, though, did not stop him from remaining an important part of the Temple Knights, with whom he later performed a number of small missions.

The following takes place during Sea Slug and The Slug Menace.

In the year 169, the government of Kandarin authorised the construction of a Fishing Platform off the coast of Kandarin, in a very deep, fish-rich part of the Southern Sea. Here the fish were farmed in mass numbers, decimating the fish population closer to the coast. Witchaven soon lost its formerly thriving fishing industry, and it fell from the public eye and faded into obscurity.

O'Niall, though, continued to live a relaxing life within the village, despite its large unemployment rate and poor economy. He soon noted, however, a number of strange occurrences both at the Fishing Platform and in Witchaven. An ancient species of Sea Slug, thought for thousands of years to be harmless, had secretly managed to overrun the Platform and village, turning many of the inhabitants into zombie-like thralls.

Informing the Temple Knights of this, O'Niall began to gather historical data on the area. Sir Tiffy Cashien, a senior officer of the Temple Knights, recruited the help of an adventurer that had previously assisted them in the capture of Solus Dellagar, as well as saved a number of individuals from the Fishing Platform.

The adventurer was sent to O'Niall, who helped him or her discover the origin of the Slugs: Mother Mallum, a sentient Sea Slug that had wreaked havoc during the God Wars. O'Niall directed the adventurer to an ancient book, which he believed would hold the answer to keeping Mallum imprisoned in an ancient Temple Knight structure beneath Witchaven. He was later possessed by a sea slug.

The adventurer followed the book's instructions, only to discover too late that the book actually described how to release Mallum. After killing the Slug Prince, the adventurer was nearly ingested by Mallum, but managed to narrowly escape with the help of the Temple Knight Savant.

The Temple Knights found that O'Niall had recently been possessed by the Sea Slugs, but was in the early stages of symbiosis and thus had not gained many of the physical qualities of those possessed by the parasites. O'Niall, his mind now destroyed and his body a puppet, fled Witchaven before he could be apprehended, and has since not been seen, not even his rocking chair.

The Temple Knights have previously ordered all agents to kill Col. Jake O'Niall on sight, but this was removed in a hidden update. During Salt in the Wound, Eva tells that he was captured and interrogated, but would not say anything. He could not be freed as his slug's tentacles were too deep. He presumably is freed of mind-control after the death of Mother Mallum.