Start a Wiki
OS
This article is about the dwarf. For the music track, see Colonel Grimsson (music track).

Script error Colonel Grimsson is a member of The Red Axe Mining Company, and the secondary antagonist of the Red Axe series. He serves as the Red Axe director, Hreidmar's, right hand man and presumably the leader of the Red Axe's guards as well as an army at Barendir. During King of the Dwarves, Veldaban discovers that he does not voluntarily cooperate with the company, but was brainwashed to believe so.

Colonel Grimsson is fight-able as a class X2 boss monster in the Dominion Tower minigame alongside Hreidmar if the player has completed the quest Birthright of the Dwarves.

The Colonel was a well known dwarf for his efforts in fighting the trolls. He fought as the commanding officer in the Battle of Barendir, where the forces of Keldagrim attacked a large troll army. During the battle, Grimsson led the Black Guard into what was a massacre when he ordered them to charge into a troll entrenchment. Grimsson, once reaching the troll defence, began to furiously kill every troll around him, but suddenly he was struck in the skull by a large stone. Without warning, the Colonel went mad and began to attack everything around him, including his fellow dwarves.

Veldaban, who was a lower rank at the time, ordered Grimsson to be restrained and taken into custody. Before he was put on trial, however, he went missing. He later joined the Red Axe where his madness and anger would be accepted as a strength. His most noticeable physical trait is the large scar on his face which he received at the battle. Colonel Grimsson almost mistook Grunsh, the ogre ally of the Red Axe, for a troll when they first discovered him.

In Forgettable Tale..., he is seen along with the Director, Grunsh, and some gnomes from Arposandra discussing the creation of the chaos dwarves and their current production status. At the end of the quest, he is seen observing the player make a drunken fool of him/herself in front of the congregation of dwarves at the Laughing Miner pub. Seeing that Grunsh's spell was a success, he was sure that no one will believe the player's tales of what they found.

Forgiveness of a Chaos Dwarf

During the Forgiveness of a Chaos Dwarf quest, the player and Veldaban uncover another of the Red Axe's large hidden bases, only this one is far more important. It actually contains the machines needed to convert normal dwarves into Chaos Dwarves against their will. Grimsson is seen with Hreidmar and Grunsh as they oversee the conversion of the dwarves, but suddenly spot the player and Veldaban when he has a flashback. While the player and Veldaban try to escape from the secret factory, Grimsson gleefully reveals that the Chaos Dwarf killed earlier in the quest was in fact Veldaban's lady friend, Hilda. After the realisation of this, Veldaban swears he will kill Grimsson.

King of the Dwarves

During the King of the Dwarves quest, the player and Veldaban confront Grimsson. During the conversation, Grimsson teases Veldaban about his girlfriend dying, and Veldaban realises that Grimsson was indeed brain-washed. This aggravates him and he will begin to attack Veldaban. Players must attack him to distract his attention before Veldaban is forced to retreat, which will necessitate returning to the caverns to begin the fight again.

Once you have his attention he will start attacking you with a combination of ranged and melee. His hits are accurate but will deal fairly low amounts of damage when they land. A couple of pieces of medium-healing food, such as monkfish is recommended.

Seeing as he is rather weak, the fight is relatively easy. Veldaban will help you by dealing damage but cannot be relied upon to finish the fight for you. Once Grimsson is defeated, he will laugh and retreat, claiming that you may be able to defeat him, but you won't be able to defeat his army.

During the Birthright of the Dwarves quest, the player and Veldaban attack the Red Axe base along with an army, to put an end to the Red Axe activities once and for all. Grimsson lowers the bridges in the Lava-Flow mine so that Veldaban's army can't go any further into the base.

Veldaban and the player confront Hreidmar and Grimsson at the top of Hreidmar's Keldagrim Palace replica. Grimsson will then fight both the player and Veldaban. In the first fight, he occasionally grabs the back of Veldaban's collar, and in this time any damage you would do to Grimsson will be done to Veldaban. When he gets full adrenaline, he activates the berserk ability.

In the second fight, when he is resurrected as a Chaos dwarf, he is stronger and has more life points. When he gains full adrenaline, he now uses a special ultimate ability, which makes him charge the player down and, if successful, repeatedly hit them for 30% of their maximum life points. This attack can be stopped by stunning him or avoided entirely by running away from him. 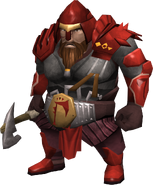 Grimsson when using ranged attacks during King of the Dwarves. 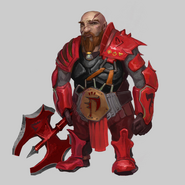 Retrieved from "https://runescape.fandom.com/wiki/Colonel_Grimsson?oldid=24562785"
Community content is available under CC-BY-SA unless otherwise noted.