The Combat Academy, which is run by Lady Deathknell, is a place in Lumbridge for players to learn the basics of combat after the Evolution of Combat. It hosts a tutorial for all information related to the new combat system. She offers 7 lessons for players to understand the basics.

The academy is located at Lumbridge, west of the Smithing tutor and north of the General Store. It can be also accessed from either the first login after the Evolution of Combat update, or the designated button located on the game control panel (shown to the left). In the area are seven training dummy dispensers, which could be used to dispense a dummy, with options to choose its combat style, weakness and strength. After the dummy appears, the player could opt to turn on retaliation to have it fight back. There are also three stationary dummies that are weak against nothing.

To start the tutorial, you have to empty all your belongings in both inventory and equipment slots. There is a deposit box to deposit items into your bank. Afterwards, talk to Lady Deathknell. You can start with the beginning or any particular courses.

In each course, you act as a demonstration assistant to perform action on what Lady Deathknell says. The courses will proceed in different sessions.

After you complete certain actions, you can proceed to the next session by talking to Lady Deathknell. You can also leave the session in the middle, but you need to go through the whole courses again next time.

Your performance is graded according to certain outcomes in the form of Ranks: Champion, Hero, and Legend. The outcomes can be accessed from the interface when you right-click on Lady Deathknell and "start-tutorial".

In this section, the player will assist Lady Deathknell to identify and exploit opponents' weakness.

Notes: 1) At one point, the noticeboard tells you to select the magic spell "Wind Strike" - there is no Wind Strike in your spellbook, so just select "Air Strike" and continue. 2) Lady Deathknell presents a dummy, not skeletons, and when she says "Excellent, try another" be sure to 'Target' the dummy again in order to select the proper weapon for attacking it the 2nd and 3rd times.

Rank is achieved by completing particular outcomes in the courses. The outcomes can be examined from hovering the icons on the interfaces.

They are in three-tiers: Champion (a throne), Hero (a star), and Legend (a dragon).

If you achieved higher rank, the lower ranks would also be unlocked. 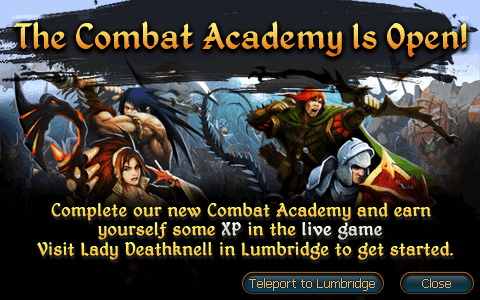