The stern leader of the Menaphite Guard. 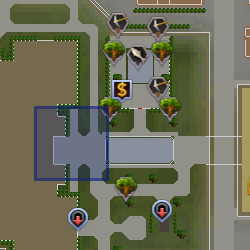 Commander Akhomet (Imperial) is the faction leader of the Imperial district in Menaphos. She is first met during The Jack of Spades quest. After the player is sent to meet her by 'Admiral' Wadud, the Jack of Spades steals her ceremonial dagger.

Ozan reveals that while she used to be a great soldier, her personality changed during the war, becoming more of a "yes" woman, complying with the Pharaoh's insane orders and bullying her soldiers.

She cares greatly for the inhabitants of Menaphos. In Our Man in the North, even though she knows that it researching historical texts and bloodlines are forbidden and the city is on lockdown, she allows Aristarchus entry into the city due to being a citizen of Menaphos. She also has her doubts about the plague, as she has been in contact with the Sophanem High Priest.

During 'Phite Club, the player meets with Akhomet again in order to secure imperial signets for Batal. Akhomet is surprised that the player would speak openly about overthrowing the Pharaoh, and admits that if they were a soldier under her command, would have them publicly flogged. She cannot deny the Pharaoh's state and agrees to join if he is mentally evaluated and that the Jack of Spades is apprehended. When the player brings her the Jack's bloody hood, she is surprised they killed them, and asks what they did with the body. Upon hearing that it was burned, she is impressed that the player honoured Menaphite traditions and gives them some imperial signets.

Akhomet's career has consisted of ebbs and flows, earning her stripes in the Kharid-Menaphite war and following in her mother's footsteps as captain of the guard.

Now, in epochs of relative peace, all she has to remember her glory days by are the royal guard, a team and loyal and grizzled veterans. The tasks the guard have been assigned lately have been nothing short of insulting, leaving their appetites unsated and savouring mouths hungry for more.

It is challenging to maintain your resolve when bandits and lizards are the only target for skills moulded from prime years of military prowess, but it is something she has taken in her stride, incorporating her own batch of brutal authority.

When it comes down to the wire, she cares intensely about the people of Menaphos and the guard she commands, even when that comes to blows with the bellowed bidding from the pyramid. 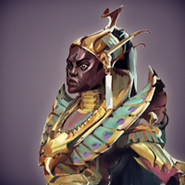 Concept art of Akhomet.
Click an image to enlarge

Retrieved from "https://runescape.fandom.com/wiki/Commander_Akhomet_(Imperial)?oldid=24565847"
Community content is available under CC-BY-SA unless otherwise noted.