Commander of the Imperial Guard. 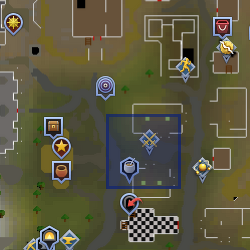 Commander Denulth is the leader of the Imperial Guard in Burthorpe and a commander in the Burthorpe - Troll Country War. Talking to him allows the player to start Death Plateau and Troll Stronghold. He can be found in the courtyard just east of the bank. He tells you that the most important thing you can do is fight off trolls.

Speaking with him also reveals political tensions between the Imperial Guard and the White Knights.

Commander Denulth played a small role in one of Meg's cases regarding Major Mary Rancour's disappearance, released as a teaser to Kindred Spirits. Talking to him revealed that he was not there for her abduction, as he was fighting trolls. He does assure the player that had he been there, he would've made sure it didn't happen.

The following takes place during the case Jewel Thief

Another case in Mega May involved a thief who stole from Herquin's Gems. The player learns that the suspect is an imperial guard with a limp. When Denulth is told of this, he realises who it is and is disgusted. As a result, he gives the player full permission to search the suspect's footlocker, and promises that he will be reprimanded accordingly.