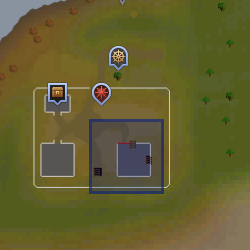 Commander Loman is the third-in-command at the Army Recruitment and Mobilisation Society, having worked there for nine years, and is found on the ground floor of the Officer Tower. He offers his services to players whose rank is 100-199. He manages the Rewards shop for players whose rank is 100-199. He sells the commander outfit, poor locator, and quest kit (medium). His spoils rewards are either of higher level/value than those of Serjeant Cole or are the same reward but with a greater quantity. Certain spoil rewards include pure essence, steel bars, jute seeds, etc. He is also able to enchant sapphire, emerald, ruby, and diamond rings for players.

Retrieved from "https://runescape.fandom.com/wiki/Commander_Loman?oldid=24563871"
Community content is available under CC-BY-SA unless otherwise noted.