It's a tree gnome. 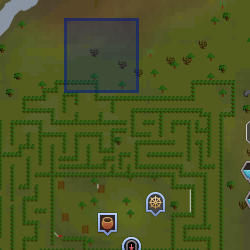 Commander Montai is the commander of the Gnomic defence at the Khazard Battlefield north of the Tree Gnome Village. Montai directs the battle from behind the trenches at the front line, wearing a red helmet and chestpiece to show his importance. To help ensure victory for his forces on the battlefield against the forces of General Khazard he has enlisted the help of an adventurer to help him to fix a Ballista and retrieve coordinates for the attack from three gnome Trackers during the quest Tree Gnome Village.

Commander Montai has also ordered the addition of the Tortoise Regiment lead by Lieutenant Schepbur. He is spoken to mainly during the Tree Gnome Village quest, but can be spoken to after the quest as well, where the player will inquire as to how the battle is going, to which he will reply "We're hanging in there, soldier.". He is also one of Doric's customers in Task 5 of Doric and Boric Tasks that follow the What's Mine is Yours quest, requiring 10 steel swords and 8 gnome platebodies, which gives Smithing xp and charges for the Gofannon amulet.

Retrieved from "https://runescape.fandom.com/wiki/Commander_Montai?oldid=24562624"
Community content is available under CC-BY-SA unless otherwise noted.