RuneScape Wiki
Register
Don't have an account?
Sign In
Advertisement
in: Members' items, Items that are reclaimable on death, Untradeable items,
and 15 more
English

View source
watch 02:34
Fire Emblem Warriors: Three Hopes - The Loop
Do you like this video?
Play Sound
"Comp" redirects here. For the bow type, see composite bow. For the achievement, see Completionist Cape (achievement).
For other variants of this item, see trimmed, hooded.

A cape worn by those who've overachieved.

The completionist cape, also known as comp cape, is the best cape in the game and is awarded to players who have "completed the game" by finishing all major content available. It can be bought in the Varrock Museum for 5,000,000 coins from the museum guard on the top floor by members who have all skills trained up to 99, Dungeoneering, Slayer and Invention up to 120, completed all quests and tasks, unlocked all the music tracks, prayers, and magic spells (except for Bounty Teleport), and completed a number of other requirements listed below. When bought, it comes with a corresponding hood. The cape can be upgraded to a trimmed version after completing a list of additional requirements including unlocking profound decorative armour at Castle Wars and a full statue of Dahmaroc in the player's house. This does not increase the cape's stats. The minimum experience to wear this cape is 601,991,332.

Equipping the untrimmed cape will unlock the [Name] the Completionist title. This title can be used without wearing the cape once unlocked, and will re-lock when the cape is unable to be worn due to new requirements. As long as a player has the right to wear the cape, they may purchase additional capes from the museum guard.

The cape dates back to the Second Age, when it was enchanted by the mage Dahmaroc.

Players who have completed all the requirements for wearing a completionist cape can sit on the Throne of Fame in the Max Guild.

The colours of a completionist cape can be changed by using the Customise option in the right-click menu of the cape. In the Skillcape Customiser interface, players have the right-click option on any of the four colour palettes to get or set a certain colour via the HSL colour algorithm (hue, saturation, and luminosity). Each colour palette can also be left-clicked to choose a colour using an in-game colour picker.

This cape leaves a particle trail behind the wearer. The particles change from white to gold when upgraded to the trimmed version. The particles' colour is not customisable beyond this.

The cape combines the abilities of several other items:

Members can buy the cape and hood on the top floor of the Varrock Museum for 5,000,000 coins from the museum guard. Attempting to touch the cape without meeting all requirements will turn the player into a random animal (including monkeys, squirrels and chickens) and knock them away from the cape. They will also be given a list of remaining Achievements. The easiest way to check your outstanding Achievements is to open the Hero interface. The Achievements tab contains a list of both untrimmed and trimmed cape Achievements both of which can be filtered to only show outstanding Achievements. Another method for maxed players is to use the right-click options on the throne in the Max Guild.

There are 69 achievements in this subcategory.

Wearing this cape and using the cape emote performs an emote in which the player transforms into a dragon, flies up and hovers in the air while burning a classic "RS" sign into the ground before landing and transforming back into the player. The RS symbol disappears when the emote is over.

If this emote is performed with a trimmed cape, the dragon is gilded; adding a gold plating to the wing membranes and along the dragon's neck and head. The movements of the emote remain the same. 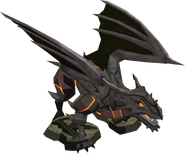 The dragon in the untrimmed Completionist cape's emote.

A player performs the cape's emote (click to view).

Comparison with other capes