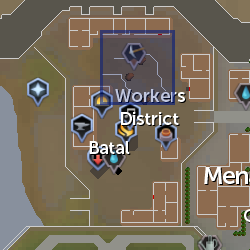 Concentrated sandstone rocks are deposits of sandstone located in the Menaphos worker district mining site and VIP skilling area of Menaphos. When mined they yield multiple 1kg, 2kg, 5kg, and 10kg sandstone blocks before depleting. After a random time interval the concentrated sandstone rock will collapse and cannot be mined from until it replenishes itself, which is also random. 2.7 reputation is gained from mining the sandstone.

When equipped with a magic golem outfit, augmented crystal pickaxe with the honed and furnace perks, decorated mining urns with an urn enhancer and having a lava titan summoned, one can expect experience rates of 150,000+ per hour from level 96 mining gaining an average of 25,000 experience every 10 minutes.

Phenakite is an exclusive Jewel that can only be found by mining these rocks in the VIP skilling area.

Retrieved from "https://runescape.fandom.com/wiki/Concentrated_sandstone_rocks?oldid=23324755"
Community content is available under CC-BY-SA unless otherwise noted.