View source
watch 02:52
Roblox: DeepWoken - The Loop
Do you like this video?
Play Sound

Conquest is a members-only minigame released as an addition to the Void Knights quest series. Like Pest Control, the other minigame playable from the Void Knights' Outpost, the only requirement for Conquest is level 55 Combat. It is a safe minigame, in which players cannot die. It awards commendations in higher quantities than Pest Control, but games may take longer and there is no time limit per game.

Conquest is a turn-based, player vs. player, tactical war game. The initial premise is similar to the real-world game Chess, though it differs in many key areas. The player is put in command of a squad of Void Knights. Every person gets the same amount of resources to build his squad with, and can do so by talking to Knight Dorian. Players are able to choose their troops and their starting formation, and they can also pick a number of powerful special Commands. Different units have different Damage, Range, Health, and Movement rates. You can start this minigame and view the in-game tutorial by speaking to Captain Ethar.

This minigame is located on the Void Knights' Outpost, which can be reached from Port Sarim by talking to the Squire on one of the southern piers. One can also get there using the special move of a spinner, torcher, ravager, or shifter familiar (requires 34 Summoning).

Within the outpost is the Conquest Training facility with Knight Dorian and his assistant Captain Ethar where players may exchange commendations and manage a team similar to Mobilising Armies. One may also talk to Captain Ethar and choose the appropriate option to be taken through the Conquest tutorial, a suggested requirement for The Void Stares Back.

Players have 1000 points to purchase squad resources, which can be spent on either units or commands. A player can choose a maximum of 10 units and 4 commands.

In addition to choosing the units and commands, the starting formation can be changed. You can place your units anywhere within the first three rows on your side, but there are no other restrictions on how you organize them. For example, you might put your units with poor value blocking access to units with higher value.

By default, everything is ready to play, though customising units, commands, and formation is a must for any successful player. This can be done by talking to Knight Dorian (or using the right-click options), or using the blackboards downstairs. A good way to start is to remove all purchases and then create a custom set-up.

Once ready to start, you can enter one of the two waiting rooms located downstairs to begin your game.

The room with the green door matches you automatically, and pairs players at random based on rank (paired with the closest rank). Games have a turn period of 1 minute, and no stakes can be made. In the room with the red door, players manually choose whom to challenge. The challenged player chooses the duration of each turn, from 30 seconds to 3 minutes in intervals of 30 seconds, and stakes can be made similar to the Duel Arena.

Conquest is a turn-based strategy game played on a 20-by-20 square board. Several obstacles will be randomly generated for each game.

Players alternate between moving one unit each turn, like in chess. Each turn is split into four segments, or Phases: selection, movement, combat, and rally.

Commands can be used in any phases during the player's turn, although commands that affect movement or combat must be used before or during those phases.

Units affected by a command will have colored icons on the floor beneath them, and the details menu will be modified to show the effects. A player can call up the details by right-clicking on a unit any time during a match to show the unit's attributes.

By default, each player has one minute per turn, but this can be changed (from 30 seconds up to 3 minutes) if you use the invite room. A warning bell will ring when there are 10 seconds remaining in your turn, and your turn ends when time runs out. There is no overall time limit for the entire game. Players may end their turns early and do not need to use all the time allowed per turn.

In order to be awarded commendations and rank for playing, a player must perform at least 11 actions (move, attack, command) in the game. Players farming thaler during the Minigame Spotlight will usually set the interval per turn at 3 minutes and end the game before 10 turns.

The game ends when one player resigns, the players agree to a truce, or one side loses all their units.

There are several units available for deployment in Conquest, and the player begins with the ability to deploy all of them. Units are commanded in Conquest by clicking on them and instructing them on where to go, in much the same way as the Mobilising Armies minigame released in 2009.

Different units have different strengths and weaknesses, and strategies are needed in order to exploit both one's own units' strengths, and the enemy units' weaknesses. Each unit has stats which fall into five categories, viewed by selecting the unit one wishes to know the stats of and clicking "Details".

Units have stats in each of the following categories: 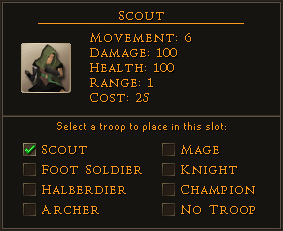 With great speed and movement, scouts are often deployed first in Conquest battles. They are poor fighters, but can move great distances (crossing more than half the board with the Charge command) and are ideal for attacking enemy ranged units such as Archers. When Battle Cry is used on them, they can take out all units other than champions. Because of their low price, they are often treated as sacrificial units, killing a single target and then leaving themselves open to retaliation. 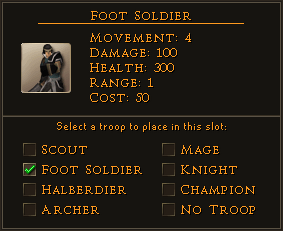 Foot Soldiers are good all-round units and have high health, making them good at soaking up damage. Their damage, however, is low, and they can be easily overcome by Knights or Champions. 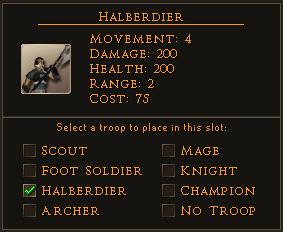 The only melee troop with a range of more than one, Halberdiers can target enemy melee units without taking damage in retaliation. They can be protected by screening them with other units. 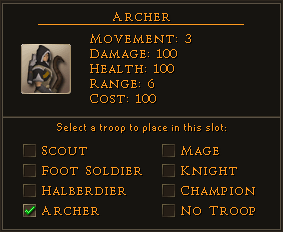 Archers have the longest range in the Conquest minigame, and can give the player the upper hand if deployed on enemy units before they reach a player's ranks. However, they are weak in close combat, and can be easily killed by any unit that manages to reach them. If used, they are often an early target for enemy Scouts, which can sacrifice themselves in a favorable trade. 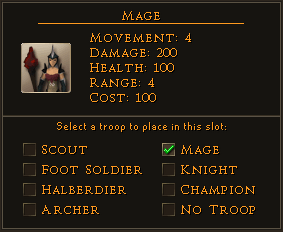 The Mage does more damage than the Archer, but has a shorter range, and is just as fragile. 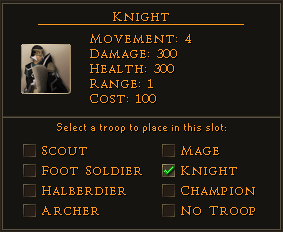 Knights have the same health as foot soldiers, but also have a strong attack. However, they can be easily overwhelmed by any other piece if Battle Cry is used, and are usually lost quickly when facing good players. 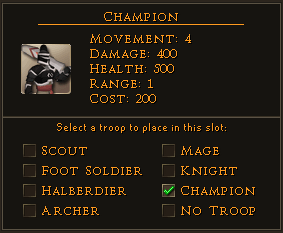 Champions are the strongest unit on the battlefield. Their movement is the same as a foot soldier, but they have high damage and hitpoints, and can kill most units in one hit. Though they must be wary of ranged units. A full-health champion can only be killed in one shot by using Battle Cry on a Knight or another Champion.

It can be beneficial to use a wider range of units to counter various units you may encounter.

You can choose up to four commands to be available for a game. Each command can be used multiple times, as long as it is off cooldown and you have enough command points. You gain 25 command points for free every turn, and also gain points equal to the cost of each enemy unit you kill (so killing a scout will give you 25 extra command points, etc).

After each game, a player gains or lose ranking depending upon the game's outcome. Much like in other ranked minigames, the amount of rank won or lost depends upon the two player's rankings. In the event of a truce, if it was nearly a tie (as most truces would have, such as a stalemate between two units), generally both players lose a small amount of rank. If one player was winning, then that player likely receives more ranking.

Ranking and commendations are different things, and you cannot lose commendations. However, ranking starts at 1000 and can rise or fall based on wins. A rank of 1250 is needed to be ranked on the high scores and is one of the requirements needed to get a trimmed completionist cape. As of 19 November 2017, there are 28,342 players ranked 1250 or above on the high scores.

Each time you play Conquest, both players are awarded Commendations (as earned from playing Pest Control ) which can be exchanged to the Void Knights for a variety of options, such as Combat Exp, or Void Gear . The amount each player earns from playing a game of Conquest works as follows:

When both players begin playing, the game starts counting the number of rounds between players. If the game ends too early, either by early truce, resignation, or army elimination, then neither player gains nor loses rating, and neither gain any commendations.

Therefore, contrary to some popular opinions, the clock itself is irrelevant to the commendations awarded, as is rating, and winning the game does not increase the commendations. Only Combat Level directly changes the number of commendations between the two players. (The only exception where a player does not gain any commendations after a long enough game of Conquest is when a player logs out during a game or lags and is kicked out, and the remaining player accepts the victory before the kicked player is able to return).