Cook's Assistant is the first RuneScape quest ever released.[1] In the quest, players must obtain a bucket of top-quality milk, a super large egg, and a pot of extra fine flour. They need to give the items to the cook, who requires the ingredients to make a birthday cake for Duke Horacio.

This quest was one of the six available during RuneScape's launch, and was originally developed by Paul Gower. It has since gone through a rework and another improvement which introduced different ingredients and additional rewards.

The Lumbridge Castle cook is in a mess. It is the Duke of Lumbridge's birthday and the cook is making the cake. He needs a lot of ingredients and doesn't have much time.

A feast for a Duke

To start the quest, talk to the cook in the Lumbridge Castle's kitchen on the ground floor on the south side of the castle. He tells you that it is Duke Horacio's birthday, and he is supposed to prepare a cake for the celebration, but he has forgotten to bring some of the ingredients required for the cake. He then asks you to acquire a bucket of top-quality milk, a super large egg, and a pot of extra fine flour for him.

Before heading off to collect the ingredients, take the empty pot sitting on the table in the kitchen if you don't have one with you already. 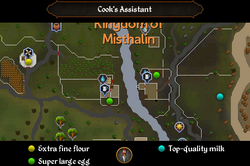 A bucket of top-quality milk may be collected from the Lumbridge cow field. The cow field can be found on the east side of the River Lum north-east of the goblins. To obtain the milk, simply use a bucket on the prized dairy cow. A bucket may be found near the cow if needed.

Lastly, to obtain the extra fine flour, pick up some wheat from the field west of Fred the Farmer's farm. Leave the field, and head north-east to Mill Lane Mill. Speak to Millie Miller about making extra fine flour before climbing to the top floor, so she can convert regular flour into the extra fine kind by realigning millstones. Use the wheat with the hopper and then operate the hopper controls to grind the wheat. Finally, head down to the ground floor to collect the flour by using the empty pot on it.

Head back to Lumbridge Castle and deliver the ingredients to the cook for your reward. 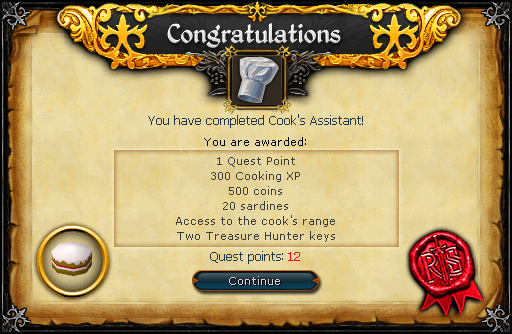 The completion of Cook's Assistant is a requirement to complete the following:

Cook's Assistant was first released on 4 January 2001 on the launch of RuneScape Classic, the same day The Restless Ghost, Demon Slayer, Romeo & Juliet, Shield of Arrav and Sheep Shearer quests were released. It was originally developed by Paul Gower, one of the co-founders of Jagex. Andrew Gower, another co-founder, also contributed to the quest, while Nishal K did the QuestHelp and audio developer Ian Taylor worked on the audio for the quest.[2] A rework of the quest was developed by RuneScape game designer Chihiro Yamada, the Quality Assurance was completed by Daniel G, and the graphics were done by Matt M.[2]

Another improvement was implemented on 15 December 2009.[3] The 500 coins and 20 sardines rewards were added with it. The improvement also changed the type of ingredients that were required. Beforehand, players only had to bring an ordinary egg, bucket of milk and flour to the cook, which meant that they could just finish the quest by talking to the cook twice with the ingredients ready. The second improvement was developed by Fred M, the Quality Assurance was done by Dean O and James H, and the graphics were updated by Alec V, Giuseppe G, and Daniel J.[2]