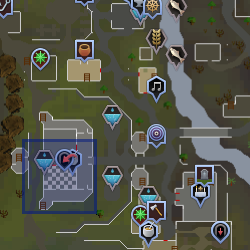 The cook is Duke Horacio's personal chef. He usually seems unprepared, but with help, he prepares great food. He is found in the Lumbridge Castle kitchen and is the starting point for the Cook's Assistant and Recipe for Disaster quests. Completing Cook's Assistant quest grants use of his magical range, which lowers the chance of burning food compared to other ranges. Talking to him about use of his magical range, he hands out a book called the "Cook-o-matic manual".

In Recipe For Disaster, it is revealed that he is a descendant of Franizzard Van Lumbcook, the legendary cook who defeated and banished the evil Culinaromancer a century before. A part of his reward for doing so was a permanent position as chef to the Duke of Lumbridge for himself and all of his descendants, including the current Cook.

The cook asks an adventurer to help him recreate one of his ancestor's feasts, which unintentionally undoes the binding magic trapping the Culinaromancer, releasing him. Gypsy Aris then traps the Culinaromancer and the rest of the Secret Council of RuneScape in time, giving her time to perform a ritual that she hopes will release the council members and defeat the Culinaromancer for good. She asks for the adventurer's help to do so.

During A Christmas Warble, the cook said he enjoyed food been stolen by Ebenezer Scourge because he could cook another feast for the event. Upon finishing the event, having restored the feast, he said he was upset because his opportunity for further cooking had been ruined. He was seen wearing red and green checkered trousers, wearing a chef hat with mistletoe attached to it.

After completion of all of the hard Lumbridge and Draynor Tasks, the cook offers a daily hamper of food. This food basket contains several randomly selected food items.

Players may also need to speak to him for certain Treasure Trails. An anagram clue in a medium trail features the Cook, under the guise of Ok Co. He will issue the player a challenge scroll, to which the answer is 7.

Retrieved from "https://runescape.fandom.com/wiki/Cook_(Lumbridge)?oldid=24562244"
Community content is available under CC-BY-SA unless otherwise noted.