I hope she can find all the ingredients! 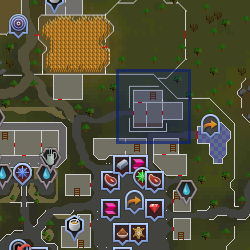 The cook is a servant that players with at least level 30 Construction can hire to do various services in their player-owned house. The cook has a wage at 3,000 coins (2,250 coins after the completion of Love Story). Players must pay her the wage every eight uses of her services. The cook has inventory space for 16 items and a trip time of 17 seconds.

Players can hire the cook at the Servants' Guild, which is located north of the marketplace in East Ardougne. All five servants wander inside the building except for the servant you have hired (if any). Before hiring any servant, the player must meet three requirements:

The services provided by servants can be cosmetic or vital resources for training Construction efficiently. Actions marked with an (*) count as one service before payment is required. The cook can:

Retrieved from "https://runescape.fandom.com/wiki/Cook_(servant)?oldid=24562766"
Community content is available under CC-BY-SA unless otherwise noted.