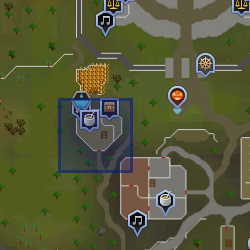 Cooks' Guild The Cooks' Guild (also known as the Cooking Guild or the Chefs' Guild) is a three-story windmill that is just west of Varrock, with a tiny wheat field behind it. Players can use a skills necklace to teleport just outside its entrance.

), with a cooking range icon (

) located on the 1st2nd floor[UK]. At one point, it was also marked with a brewery icon, despite the fact that no brewery has ever existed here. Jagex removed this some time later.

To enter the guild, players need a Cooking level of 32 and must be wearing a chef's hat, sous chef's toque, or cooking cape for members, the latter requiring the mastery of the skill to wear. A max cape can also be used.

Higher levelled players can enter freely after completing the hard section of the Varrock Tasks. However, in a free-to-play world, you still need to wear the chef's hat to enter this guild, even if you are wearing a cooking cape.

The style of the Cooks' Guild is that of much of Varrock - Tudor style with timber frames. The structure is based around a windmill, which is essential for making flour, a key ingredient to recipes such as bread and cake. The guild is spread over three floors with a range at the first floor and the hopper controls at the second floor.

There is also a small wheat field right behind the Cooks' Guild, which saves much time. Before, chefs would have to run down to the Champions' Guild and use the wheat field near there. Also near there is the Grand Exchange which could be used as a banking place and a place to sell your food and still have inventory space.

On the ground1st floor[UK], players will find the Head Chef, Romily Weaklax's pie stall, a sink, a flour bin, and a table with a chocolate bar on it. The Head Chef stops players who do not meet the requirements to enter the guild. If a player has 99 Cooking, he will sell him or her the Cooking Cape of Accomplishment for 99,000 coins if he or she is also a member.

To the right, there is a small room with a bank and a range. This room was introduced with the Varrock Tasks on 10 September 2007.[1] Only players who have completed the hard Varrock tasks may use the room. When on a Free-to-Play world, if a player tries to enter the small room, the Head Chef will say: "The bank's closed. You just can't get the staff these days."

Romily Weaklax will sell players a pie book and a large assortment of pies. He also can give them a certain amount of pies to bake, and can give a small reward for doing so.

The 1st2nd floor[UK] contains two ranges and tables with pie dishes, cake tins, bowls, and two cooking apples. The millstones grind flour to be sent down the chute from the second floor. There is also a dairy churn here, which is the closest churn to a bank if the player has Varrock Armour 3.

This floor is also very convenient for making apple pies, as all of the materials are close by.

The 2nd3rd floor[UK] is the highest in the guild. It contains a hopper, into which players can put grain (found in a field north of the guild) to make flour. There are respawns on the tables for grapes, an empty pot, a cooking apple, and a jug.

This floor is mainly used to make flour, but is also popular with wine makers, as everything needed to make wine is available nearby.