Start a Wiki
This article is about the combat supplier formerly found near the Burthorpe bank chest. For his brother of the same name, see Corporal Boothe. 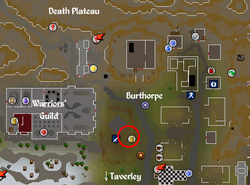 Corporal Boothe (formerly Combat supplier) was a combat supplier working for the Imperial Guard. He was located in Burthorpe, south-east of the Warriors' Guild and next to the bank chest near Major Mary Rancour. He sold some basic combat equipment in his shop, Corporal Boothe's Armoury. He has a brother stationed in the Abandoned Burthorpe mine.

Boothe speaks about his stock
Retrieved from "https://runescape.fandom.com/wiki/Corporal_Boothe_(Burthorpe)?oldid=24564653"
Community content is available under CC-BY-SA unless otherwise noted.