Start a Wiki
For other variants of this item, see non-corrupt.

This item degrades while worn, and will turn to dust.
Loading...

This item degrades while worn, and will turn to dust. 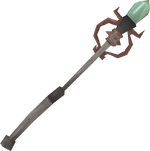 A Corrupt Zuriel's staff is a weaker version of Zuriel's staff. It is gained by killing Revenants in the Forinthry Dungeon or as a very rare drop from the Chaos Elemental. It requires 20 Magic and lasts only for 15 minutes of wielding. After the time is up, the staff will vanish.

Once you wield this item for longer than around 30 seconds, it will have the word (deg) added to its name and it becomes untradeable. Using this item in combat adds the (deg) to its name instantly, also rendering it untradeable.

The corrupt Zuriel's staff used to allow a player to autocast Ancient Magicks spells or elemental spells, however this function is now obsolete. It would also unlock the Miasmic spells from the Ancient Magicks spellbook, which, if successful, lower the foe's Ranged and Melee attack speeds by 50%.

As an hour contains 6000 ticks, there are 1500 ticks in a 15 minute period and a magical spell is able to be casted once per 6 ticks when using a staff, you are able to cast up to 250 combat spells with this staff before it degrades. Thus, each spell costs approximately an extra 245.8 coins when using this staff, in addition to the runes that have to be used.

Retrieved from "https://runescape.fandom.com/wiki/Corrupt_Zuriel%27s_staff?oldid=24540929"
Community content is available under CC-BY-SA unless otherwise noted.