An offical of Ardougne. 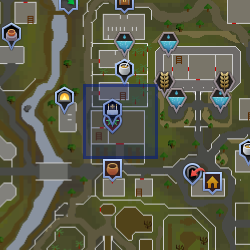 Councillor Halgrive is a councillor in the Ardougne City Council responsible for public health and safety in East Ardougne. He can be found outside the East Ardougne church.

As the councillor in charge of public health and safety, he is responsible for hiring Leo to bury the dead in the Ardougne Church courtyard.

Worried that the infected sheep may start a plague epidemic in East Ardougne, he tasks the player to get rid of 4 different types of infected sheep by burning their remains in the incinerator housed in the sheep pen of Farmer Brumty.

After hearing of the atrocities committed by the Mourners, a shocked Halgrive will believe the player and task them to control the situation within West Ardougne, due to the reputation of the adventurer and the futility of doing anything in his position without being stonewalled or "diagnosed" with the plague. In a official capacity representing the authority of the city council, he will also produce a proclamation that handles control of the East Ardougne army to the player to support the revolution and the removal of King Lathas.

Retrieved from "https://runescape.fandom.com/wiki/Councillor_Halgrive?oldid=24562408"
Community content is available under CC-BY-SA unless otherwise noted.