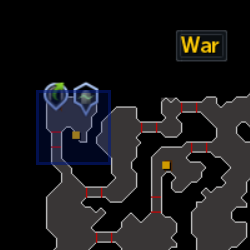 Count Check is a vampyre and account security expert located in the Stronghold of Security. During Account Security Week, he is located in Burthorpe.

He now checks the security of your account, awarding the player with a small XP lamp if the RuneScape Authenticator and a Bank PIN has been set up; if not, Count Check will give the player advice on how to set those security measures.

The player may ask Count Check to count for them, prompting him to recite four tips for account security.

During Customer Support Week 2016 (3 October through 9 October) he gave players a special clue scroll each day. Completing each scroll provided two rewards, one which everyone can open and one which can only be opened if you have an Authenticator and a bank PIN set.

During Customer Support Week he also hosted The Drop: Customer Support Edition. Players were able to take part in The Drop every 30 mins. If the player answered all 12 of the questions correctly they obtained large XP lamps, unlocked the title [Name] the Knowledgeable, and were entered into a prize raffle.

He also had a minor role in the 2016 Thanksgiving event. When Turkey Tomb was spied, Count Check believed the player was speaking to him, but was rudely informed that they were after the turkey.

During Customer Support Week 2017 (15 May to 22 May) he was located north of the Lumbridge Crater and only checked to see if players had secure accounts, giving out yet another small XP lamp for having both the Authenticator and a bank PIN set.

He moved to the Lumbridge lodestone from 2 October 2017 until 9 October 2017, where he was the host of The Drop: Customer Support Edition. He also gave out special clue scrolls daily.

During Account Security Week 2018 (9 July to 15 July) he is located in Burthorpe, giving out yet another small XP lamp for having both a bank PIN and the RuneScape Authenticator set, and also giving daily clue scrolls.

Checking the player's security.
Click an image to enlarge

Retrieved from "https://runescape.fandom.com/wiki/Count_Check?oldid=24610713"
Community content is available under CC-BY-SA unless otherwise noted.