Start a Wiki
RSCOS
Not to be confused with Karamja Volcano resource dungeon.
[view] • [talk]

The Karamja Dungeon is located underneath the Karamja Volcano, and the Crandor Dungeon is located underneath Crandor Island. Both dungeons are connected to each other. In order for a player to gain full access to the Crandor dungeon, they must have completed the final fight in the quest Dragon Slayer. To enter, players should go to the top of Karamja volcano and climb down the rope.

Until the advent of the Stronghold of Security, this dungeon was the most dangerous non-Wilderness area for free-to-play. To both members and non-members, it was, and still is, a veritable epicenter of training. Its proximity to the major fishing area of non-members makes it all the more popular. Although members have other areas that allow for faster training, making the dungeon obsolete for them, many still frequent the area for purposes of Slayer tasks, its proximity to a bank, and for somewhat common drops of the rune medium helmet. 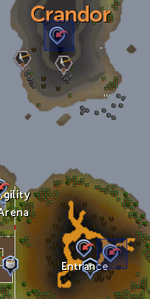 Mainly Elvarg, who is the antagonist in the Dragon Slayer quest.

Retrieved from "https://runescape.fandom.com/wiki/Crandor_and_Karamja_Dungeon?oldid=23130391"
Community content is available under CC-BY-SA unless otherwise noted.