Start a Wiki
This article is about the non player character. For other uses, see Crate (disambiguation).

He looks like he has the makings of a good bureaucrat. 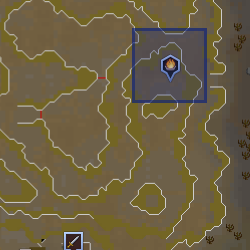 Crate is a Beacon Keeper in the All Fired Up minigame. Crate is a citizen of the Troll Country, and has been made a representative to Misthalin to aid in the Sanguinesti Liberation War and Wilderness conflicts.

Players must give Crate a cooked lava eel (only needs to be done once) in order to get him to watch over a lit beacon. Lava eels can be fished in Taverley Dungeon and in the Wilderness. When players light the beacon near him, players may pass Crate five logs (the same type that were used to light the beacon) for him to tend the lit beacon with, allowing the beacon to stay lit longer.

It is possible to talk to Crate on a non-members world, but first you have to fix the ladder, which must be done on a members' world, and requires 42 Construction. However, Crate will immediately tell anyone talking to him on a free-to-play world to go to a members' world to talk to him.

Since trolls are named after the first thing they try to eat, Crate must have tried to eat a crate as a child.

Retrieved from "https://runescape.fandom.com/wiki/Crate_(NPC)?oldid=24563631"
Community content is available under CC-BY-SA unless otherwise noted.