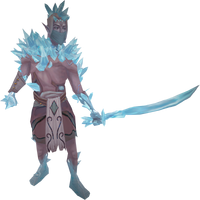 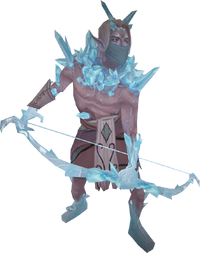 Crystal Shapeshifters are Slayer monsters located on Tarddiad after completion of the quest The Light Within. They are the only source for Tarddian crystals and the ancient elven wedding ring, an item needed to complete the Master Quest Cape achievement, Angs Off My Ring. To reach them, teleport to the World Gate with the Sixth-Age circuit, or alternatively teleport to the Eagles' Peak lodestone and run south. Interact with the controls directly in front of your character to change the Gate's destination. Rotate the dials until a number "1" is presented on the Gate (not to be mistaken with the straight line and backwards 1).

They can fight with all three combat styles, and they will switch dependent on the combat style of armour you are wearing. Crystal Shapeshifters are more dangerous than their combat level suggests and should not be taken lightly, as they use combat abilities to a much greater extent than many other monsters.

Although Crystal Shapeshifters start off in a specific form based on their spawn location, they will quickly switch combat styles based on what combat form the player is weak to. Activating a protection prayer that protects from the style that counters the player's worn equipment will prevent them from shapeshifting altogether. An example would be bringing magic armour and using Protect/Deflect Missiles; without the overhead prayer, the shapeshifter would use ranged on the player. With the overhead prayer, the shapeshifter will stay in magic form, since melee attacks are weak against magic armour. This method will not work as well with melee shapeshifters, as the shapeshifter can perform Smash and disable the player's protection prayers/curses.

In addition to regular abilities in their respective combat style, crystal shapeshifters can roll into a spiked ball and charge at the player, dealing approximately 1500-2500 melee damage, seemingly doing so when stunned or bound. A shapeshifter can roll several times in a row, dealing high damage.

Angof can be spoken with to make the shapeshifters unaggressive if desired, which is recommended, as they have a very far aggression range.

Shapeshifters do not wander from their spawn point until they enter combat (being attacked or attacking a target they are aggressive against).

Crystal Shapeshifters during the quest only give their 100% drop.

Retrieved from "https://runescape.fandom.com/wiki/Crystal_Shapeshifter?oldid=24308499"
Community content is available under CC-BY-SA unless otherwise noted.