Crystal equipment is a range of weapons and armour made from enchanted elven crystal. Crystal combat equipment requires completion of Roving Elves to use, as well as 50 Agility (although 56 Agility is a boostable requirement to travel through Tirannwn), among other skill requirements unique to each piece. Crystal tools and attuned crystal equipment can only be obtained after Plague's End. There are also the crystal chime and crystal saw, which are rewards from the gnome quest series.

Upon death in the Wilderness, the killer will receive the seed form of the crystal equipment.

All crystal equipment may be sung from seed by the player except the pickaxe and hatchet. Crystal weapons and shields take 75 Smithing to sing; crystal tools take 80 Smithing; and attuned crystal weapons and shields take 90 Smithing. To do this requires a suited crystal seed and an amount of harmonic dust, and it is done at the singing bowl in Prifddinas. Apart from the small crystal seed from The Eyes of Glouphrie, crystal singing is only accessible after Plague's End, as are attuned crystals and harmonic dust.

Alternatively, after Roving Elves, players can take crystal seeds or items to Eluned or Ilfeen, who can sing seeds into a related item and repair partially degraded items; After the events of The Light Within, Islwyn can also be found in the Ithell Clan district of Prifddinas, replacing Eluned. Neither action requires harmonic dust or a Smithing level. The initial price to re-enchant is 1,000,000 coins; each time they re-enchant a crystal seed, the price they charge decreases in this fashion:

When repairing a partially degraded item, the cost is a fair fraction of the cost to re-enchant. For example, repairing an item at 90% charge would cost 20,000 coins if the lowest re-enchant cost has been achieved. Item repair does not lower the enchantment price.

Crystal weapons and shields are level 70, the same as Barrows equipment; attuned variants are level 80, on par with chaotic weapons from the Dungeoneering rewards trader.

Crystal weapons and shields degrade in combat, whether they are regular or attuned. Each item has 50,000 charges of combat and consumes 2 charges per hit. If used in Prifddinas it will only consume 1 charge, lasting twice as long. When the item fully degrades, it will revert to its relevant seed. The bonuses of an item do not decrease as it loses charge.

When attuned crystal weapons or shields occupy both hands, the player gains a chance to deal 25% bonus damage with each hit. The likelihood scales with your Agility level up to a 12% chance. To achieve this effect, you must dual-wield attuned weapons, use an attuned two-handed weapon, or use an attuned weapon with attuned shield.

A weakly charged (20%) crystal bow or crystal ward is a reward for completing Roving Elves. In addition, players can buy new bows and wards from Islwyn in the forests of Isafdar for 1,000,000 coins, the initial recharge price.

Crystal pickaxes and hatchets are created by giving 4000 harmonic dust and the relevant dragon tool to Lady Ithell.

All normal and attuned crystal weapons and shields can be augmented.

Crystal armour is degradable hybrid armour obtainable after completion of The Light Within. It is provided by Angof's Crystal Armour Shop and is bought with Tarddian crystals dropped by Crystal Shapeshifters, or created by Angof herself from crystal fragments that can be gathered from various resources on Tarddiad.

Each piece will degrade to broken after 100,000 charges of combat, and can be repaired using Tarddian crystals. Dying with a piece of crystal armour will cause it to degrade by 20%.

Neither normal nor attuned crystal armour can be augmented.

Upon release of the armour, many players complained that the stats of the armour were not worth the time required to obtain it. In response, a set effect was added.

The set effect has a chance to activate based on how many pieces of the armour you are wearing, similar to how warpriest armour currently works. The effects are as follows:

The usefulness of Harmonious Resonance while skilling can be very situational:

Crystal tools provide unique bonuses to their tasks, such as saving ingredients, and they double the chance of finding strange and golden rocks from Shattered Heart. They have 56 charges, and 2 are used each time a bonus activates (1 when used in Prifddinas). The tools revert to seed once depleted; they are repairable and re-enchantable from Eluned and Ilfeen.

Contrary to other crystal equipment, the crystal pickaxe and hatchet are not sung from seed, nor do they degrade. They are made by bringing a dragon pickaxe or hatchet with 4000 harmonic dust to Lady Ithell. Both tools also retain their special attacks.

A crystal saw and crystal chime are rewards from The Eyes of Glouphrie and The Path of Glouphrie quests. They are sung from a small crystal seed and do not require harmonic dust or a Smithing level — furthermore, they are sung using the singing bowls in Brimstail's cave and Yewnock's cave, though the bowl in Prifddinas will create either. These tools are separate from the saw and chime sung from a crystal tool seed after Plague's End, both tools of which are more potent.

Crystal tools only stack in the bank if they have not been equipped; once equipped, even if at 100% charge, they will not stack.

Crystal hatchets, pickaxes, fishing rods, tinderboxes, and hammers can be augmented. Crystal teleport seeds can be sung into an attuned version (with infinite charges) for 4,000 harmonic dust. 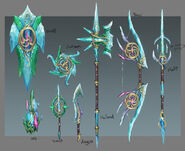 Concept art of the regular version of crystal armour

Retrieved from "https://runescape.fandom.com/wiki/Crystal_equipment?oldid=24308791"
Community content is available under CC-BY-SA unless otherwise noted.