Curator of the museum. 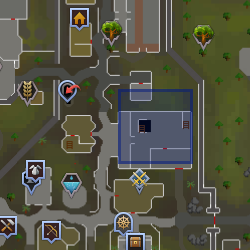 Dimension of Disaster: Curse of Arrav

Curator of the museum.

Haig Halen is the curator of the Varrock Museum. He can be found on the ground1st floor[UK] of the museum. When spoken to and asked about treasures for the player, he'll tell the player that this museum is "full of treasures" and that any treasure the museum found took some time to acquire.

Players must speak to him after gaining at least 50 kudos to complete one of the easy Varrock achievements. He is also currently overseeing the construction of the barge, which will require 100 kudos to use in the future.

He must be pickpocketed during The Golem quest for the display cabinet key to the statuette.

During Defender of Varrock, his surname matches one of the Elders of Avarrocka. He then tries to wield the Shield of Arrav, with no avail. The shield must then be given to Dimintheis in order to fend off the zombie invasion.

During Dimension of Disaster: Curse of Arrav he can be pickpocketed by the player to obtain a display cabinet key so the player can steal the Shield of Arrav.

Retrieved from "https://runescape.fandom.com/wiki/Curator_Haig_Halen?oldid=22739779"
Community content is available under CC-BY-SA unless otherwise noted.