A typical, if overly heavy handed, jobs worth guard. 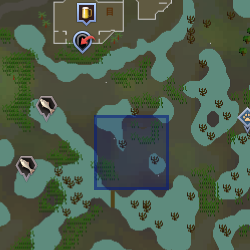 Curpile Fyod was a guard and associate of the Myreque. He watched over the hollow tree in the Hollows, the entrance to the Myreque's first hideout. He wielded a steel sword and a bronze roundshield. He has at least two children.[1]

When an adventurer seeking the Myreque approached him, he refused to let them pass, brusquely telling them to leave. When they presented steel weapons intended for the Myreque, he interrogated them to ensure they wouldn't use those weapons against his friends. If they failed to answer all of his questions correctly then he refused to let them pass, and if they failed to answer at all he attacked, sending them back to Mort'ton. Once they satisfied him, he unlocked the door, letting them past and unwittingly allowing Vanstrom Klause access to the Myreque. When the Myreque moved bases to Burgh de Rott, he continued at his post until the move was completed then left.

Retrieved from "https://runescape.fandom.com/wiki/Curpile_Fyod?oldid=25382609"
Community content is available under CC-BY-SA unless otherwise noted.