RSCOS
This article is about Customs officer on Karamja. For information on the attackable version on Rock Island Prison, see Customs Officer. 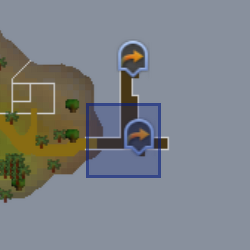 Customs officers are found on Karamja, both at the port at Musa Point and the port in Brimhaven. The player must talk to them in order to take a boat back to Port Sarim or Ardougne respectively. It costs 30 coins to depart. If a player has completed Karamja Diary easy tasks then the cost is lowered to 15 coins.

Before the player leaves, they will search the player for any banned substances, such as Karamjan rum. If the player has any on themselves, it will be confiscated. Since this item is necessary in the Pirate's Treasure quest, the player must find some way to smuggle it past them.

If the player has an activated Ring of Charos, the player can charm the customs officers into letting the player ride for free. However, this still does not allow the player to travel off the island with Karamjan rum. The customs officer does not check their inventory, but the player dances because of this, and makes the rum fall out of their backpack and breaks.

She also has a small role in one of Meg's cases.