Start a Wiki
This article is about the monster fought in Blood Runs Deep. For the version from Horror from the Deep, see Dagannoth mother.
Defined properties:

This Dagannoth mother created new "traits" for her offspring, and attempted to attack Rellekka. She thought that if Rellekka fell, Neitiznot and Jatizso would surrender immediately and Miscellania would not be able to do anything as she had captured their king. However, the attack on Rellekka was repelled by fierce Fremennik resistance. The player later encounters her in the hatchery, where she attempts to kill the player but is defeated. Due to a prophecy tablet, the player spares her as killing her would just result in another dagannoth mother taking her place. The player traps her alive in the cavern by collapsing the supports.

She has similar damage immunity as her mother, except the battle has to be initiated with the Balmung. Also, she is significantly stronger than her mother, capable of dealing 1000 or more life points of damage with her melee attack. The colour of the stripe down her back shows her current weakness. However, unlike her mother, whose colour change follows a specific pattern, she can change her weakness at will.

The Dagannoth Mother is fight-able as a class A boss monster in the Dominion Tower minigame if the player has completed Blood Runs Deep.

The Mother has fallen! 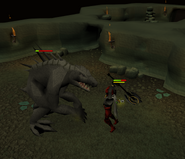 Retrieved from "https://runescape.fandom.com/wiki/Dagannoth_Mother_(Blood_Runs_Deep)?oldid=22749675"
Community content is available under CC-BY-SA unless otherwise noted.