Centre of the Abyss 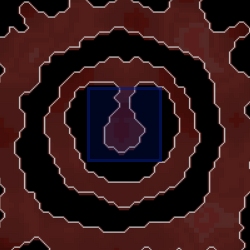 The Dark mage is located at the centre of the Abyss. He can repair damaged pouches for free and give back an Abyssal book and/or Small pouch to the player if lost. It's not required to bring him the pouches, because he can repair them even while they are in the player's bank. An alternative is to contact him with the lunar NPC Contact spell however this spell will only work if the player has met the Dark mage beforehand.

He was one of the Z.M.I. initiates charged with casting teleportation spells until they happened to fail and end up in the Abyss again[1]. He was the first to do so, and his superiors kept him there so he could hold a portal spell open so other mages could go to the Abyss through it[2]. If talked to, he will offer a dire set of consequences if he fails in this task (including head explosion, if lucky, or universe explosion, if not-so-lucky).

The mage concentrating on keeping the rift open

Retrieved from "https://runescape.fandom.com/wiki/Dark_mage?oldid=24563261"
Community content is available under CC-BY-SA unless otherwise noted.
... more about "Dark mage"
RDF feed
Is members only
Yes +
Store location
Centre of the Abyss +