The Darkmeyer disguise is created during The Branches of Darkmeyer, and is used to navigate around Darkmeyer without being caught without the need to use smoke bombs. The set consists of: Darkmeyer hood, Darkmeyer torso, Darkmeyer trousers, and Darkmeyer boots.

You will be given a vampyric title when you wear the whole set. Multiple titles are obtained as you progress through the quest. The highest rank title you have obtained will be used whenever you wear the outfit. The titles in order, based on progress, are: 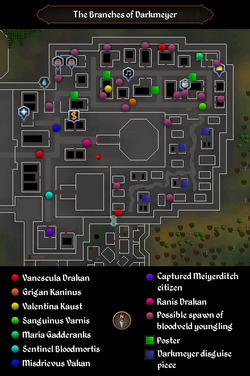 If parts of the outfit are destroyed after the player has completed the outfit, they may be reobtained from the same chests as they were originally found in. However, reobtaining them is far easier than initially obtaining them during the quest, since the vampyre juvinates and vyrewatch will merely be aggressive towards the player, rather than teleporting them away. In particular smoke bombs are no longer needed. They also do not need to be resewn. Also when re-obtaining the hood, there are 2 chests in the house that contains the disguise, the legend (right) shows the square as if the hood is in the northern chest, if you don't receive the hood search the southern chest to get it.

The Darkmeyer disguise can be stored in the fancy dress box of a costume room in the player-owned house.

When wearing the full disguise, if the player enters the Myreque Hideout in Burgh De Rott and talks to any of The Myreque there, they will panic that a vampyre has found them. The player then explains that it's the player in disguise and promises to be more careful the next time.

Later in the Myreque quest series, in the quest The Lord of Vampyrium, the player is given the House Drakan outfit, which serves as a Darkmeyer disguise with a combat upgrade.

Retrieved from "https://runescape.fandom.com/wiki/Darkmeyer_disguise?oldid=20636514"
Community content is available under CC-BY-SA unless otherwise noted.