Start a Wiki
RSCOS
This article is about Murder Mystery quest NPC. For other uses, see David (disambiguation).

He's dressed all in green. 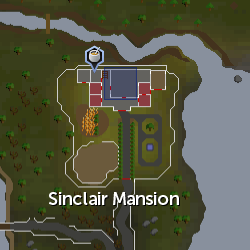 David Sinclair is one of Lord Sinclair's children. When his father was murdered, he was one of the suspects. He used to live in Camelot castle, but when King Arthur and his knights arrived, Lord Sinclair and King Ulthas agreed that the knights had greater need of the castle and so the Sinclair family moved to Sinclair Mansion instead. This greatly angered all of his children.[1] Like his siblings, David has a silver-coated item, in his case a book.

He apparently has little respect for people or any anger management, bullying the mansion staff,[2][3] being rude to the investigator brought in to solve the murder,[4] and claiming his father deserved to die.[5] However, the staff would not report his behaviour as Lord Sinclair would likely kick David out of the house to protect servants who were there long before he came around.[6] This behaviour caused the family butler Hobbes to consider him the prime suspect.[7] At some point, he bought some poison from the Poison Salesman to clear out a nest of spiders. If there are still spiders around the nest, he is the murderer.

He later conspired with his siblings to get Camelot back from King Arthur and the Knights of the Round Table. They allied themselves with Morgan Le Faye, hired some Kinshra knights from Lord Daquarius, and stormed the castle, taking the knights and the wizard Merlin prisoner.[8] They also threatened the staff, telling them that they would die if they left or spoke to anybody not of the family.[9] They then framed Anna for their father's murder, trusting that the investigator would get her free, and moved out of the mansion and into the castle. After the knights managed to free themselves, Merlin scared them off and threatened to turn them into rabbits if they tried anything again.[10]

Retrieved from "https://runescape.fandom.com/wiki/David?oldid=24562554"
Community content is available under CC-BY-SA unless otherwise noted.