The deal of the day, also known as daily deal, was a daily discount for selected products in Solomon's General Store. The products chosen for discounts usually follow a similar theme. The long-running daily promotion began on 1 September 2014 and seemingly ended on 13 June 2015, where daily deals slowed down, with subsequent deals being seasonal or event related. On 13 August, Mod Sayln wrote that the sales have not concluded and will take a new form in the future.

The discount percentage affects the prices for both purchases that use RuneCoins and Loyalty points. The discount stacks with the 10% members' discount.

Deals of the day usually only last 24 hours, starting at 00:00 UTC. Deals that last longer than a day are stated on a news post. They are usually advertised with a banner in the RuneScape Lobby and previously with an in-game popup. Products can, and have been, a deal of the day more than once.

For the month of January, 57 items from Solomon's General Store are discounted at 25% off the normal price. In addition to this, every day, a different item will have its discount increased to 66%. All items that were part of the sale are now discontinued.

On 23 April 2015, when the keepsake keys went on sale the price reduction on Loyalty Points required was meant to be 40%, however only 50 Loyalty points were discounted from the price. At the same time, the base RuneCoins price for one keepsake key was increased to 33,600 RuneCoins, while offering a discount of 8,400 RuneCoins, making it available that day for 25,200 RuneCoins. The prices were later corrected to the expected 25% discount at 25,200 Loyalty points and correct RuneCoins price.

On 6 July the price discount for all shadow heroes was listed as 50% off with a price of 108 RuneCoins on the lobby, but in actuality it cost 153 RuneCoins instead. The lobby banner was corrected during the update later that day. The discount percentages used on this page are those taken directly from Solomon's General Store. 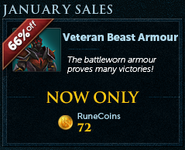 Retrieved from "https://runescape.fandom.com/wiki/Deal_of_the_day?oldid=20985356"
Community content is available under CC-BY-SA unless otherwise noted.