Dealing with Scabaras is a quest in the desert quest series and the direct sequel to Contact!. It continues the subplot of Scabaras and his scabarites' invasion of the tunnels beneath Sophanem.

Once more there is intrigue afoot in Sophanem and the High Priest has been seeking out his bold adventurer contacts from the past. Mysterious corpses, ancient ruins and unscrupulous treasure-hunters all await if you accept his mission.

Speak to the High Priest in Sophanem, located in the temple to the south of the Pyramid Plunder pyramid. He will request help with identifying a corpse. Behind the altar, there is a burial table, with the corpse laying on top of it. Approach the table, and a cutscene should play. Continue the conversation with the woman, and find out that the corpse is not quite dead and is, in fact, Maisa. Talk to the not-so-dead Maisa and ask her why she is there. She mentions that there are tunnels from the east coast of the desert that lead into those from Sophanem. Talk to the High Priest to get his support for the mission to explore these tunnels.

Head south-east from the main gate of Sophanem (north-east if using the eastern gate), through the lizards and vultures, and down to the swamp area. (If you had already used a rope during the Smoking Kills quest, you can proceed to Agility Pyramid and take the rope shortcut to the archaeologists. Just watch out for the level 74 mummies if you do so.)

Make your way through to the north west corner of the swamp, using the 'Push through reeds' menu option when your path is blocked by reeds. Approach the rock stairway from the south, climb over the fallen pillar and then go up the stairs. Speak to Lead archaeologist Abigail and Assistant archaeologist Kerner at the camp. If you have done the quest Smoking Kills you may already have done this. Before the archaeologists will help you, you must prove your competence with a series of mathematical questions, then help them collect some items for Simon Templeton.

The mathematical questions use 'round down division', so they are a bit different. The questions are different for each player. An example of the sums and the answers:

Players must round down after a division or multiplication (i.e. round an answer of 33.5 to 33).

The archaeologists will ask you to fulfil an order with Simon Templeton for them by collecting a pyramid top from the top of the Agility Pyramid (refer to the Agility Pyramid course guide for details), 10 gold artefacts from the Pyramid Plunder activity (gold seal, golden scarab, golden statuette; these items are tradeable), and distressed (oxidised) bronze items. The number and the type of items vary for each player, which are stated in the Quest Journal. They will provide the empty crate required for distressing.

There are two ways to distress the bronze items:

Once collected, all the items must be given to Simon Templeton, who is near the Agility pyramid. Pyramid Plunder items must be unnoted. Do not use the trade option. He will give you an artefact receipt. Return to the archaeologist site.

Abigail will give the player an empty Scabaras research book, and ask to collect 4 Scabarite notes and copy them into the book. These notes can be found as drops from:

When at least four notes have been gathered, add them to the research book and talk to the archaeologist again. She will give you the Scabarite key that will unlock the door to the dungeon. The empty Scabaras research book does not have to be in your inventory when copying the notes in.

Head directly north from the archaeologist's camp to enter the Scabarite Hive dungeon (the dungeon symbol furthest north) with the Scabarite key in your possession. Enter the dungeon, and talk to the clay golem to learn about the puzzle that needs to be mastered.

There are four rooms, each with a lever at the far end that needs to be pulled. There is a time limit within which all levers need to be pulled or you have to start again.

The door mechanism is powered by a furnace to the north. You must first light the furnace with logs. 3 logs can be found in a storage box to the left of the furnace which may be above your Firemaking level. It is recommended to bring your own logs in case of failure. Protean logs do work.

Lighting the logs requires a Firemaking level 20 levels higher than normal. Refer to table below for the required levels.

Talk to the Golem to assign priority to the four rooms. Depending on your skill set, set the priority and race through the rooms. With the minimum quest requirements, the priority should be in this order: Thieving room, Agility room, Strength room, Combat room. After talking to the Golem, add another log to the fire for more time. 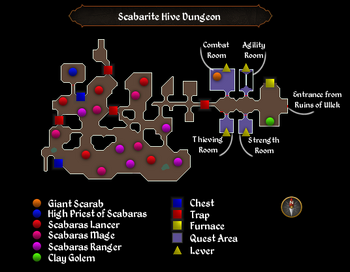 The chances of succeeding in each room based on skill level and power are tabulated below.

The Antechamber: High Priest of Scabaras

After pulling all the levers you will be allowed to enter the antechamber. Players who wish to restock supplies (food, prayer, potions) now can do so without repeating the above puzzles, as the door into the antechamber will remain open.

The monsters in the antechamber have a high chance of poisoning players, therefore some form of anti-poison is recommended. Even when under the protection of one of these potions, the ranging monsters can still hit with one 90 poison damage. Additionally, using the Oo'glog spa facilities and disabling auto retaliate will help the player avoid taking large amounts of damage.

Enter the newly opened hallway. The first trap is two squares from the entrance door. Disable it (search and de-activate) and continue west. At some point, a yellow dot will appear on the southern point of the minimap. You've reached the area with scabarites. Turn on protect from melee or ranged and run south, then west. There will be one set of traps in a small path at some point. Either disable them or run around the trap by going to the south and then north. At some point, there will be a red line on the minimap, indicating a door. Open this door and enter the room. All attacks will now cease.

There is a fair chance of a player dying while in the antechamber, even with 70+ combat stats and good armour. It is therefore highly recommended that a player brings high healing food (such as monkfish or sharks) and an emergency teleport (such as the ectophial) in case the player receives heavy damage. 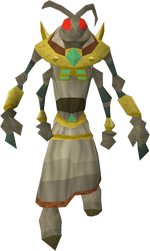 Upon entering the room, the High Priest of Scabaras will immediately talk to you, but you can safely turn off prayers, drink antipoison, etc. The order of commands with which you talk to him have little effect on progress; as long as you choose polite options and continue besting him in combat, he will eventually snap out of his trance.

During the quest you collected four (or more) Scabarite notes. For a miniquest, called Scabarites Notes, you will need to collect 19 notes and give them back to Abigail. 17 can be obtained from killing monsters as you did during the quest, the last two are found in chests in the antechamber. This miniquest is a requirement for the trimmed completionist cape and the master quest cape.

Return to the High Priest in Sophanem, and talk to him. As Maisa has gone, he will reward you with some experience as well as teach you how to make Enchanted water tiaras. 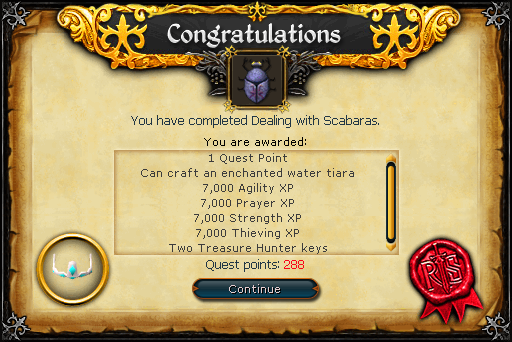 Completion of Dealing with Scabaras are required for the following:

Retrieved from "https://runescape.fandom.com/wiki/Dealing_with_Scabaras?oldid=22900429"
Community content is available under CC-BY-SA unless otherwise noted.