View source
watch 02:34
Fire Emblem Warriors: Three Hopes - The Loop
Do you like this video?
Play Sound
OS
This article is about the quest. For the location, see Death Plateau (location).
For the original incarnation of this quest, see Death Plateau (historical).
[view] • [talk]

Death Plateau is a short quest wherein you are to help the Burthorpe Imperial Guard gain access to the Death Plateau in order to defeat the hostile trolls.

Trolls have come down from the north and are camped on Death Plateau. They are using this base to launch attacks on the principality of Burthorpe! The Imperial Guard is taking heavy losses. They need your help!

Start the quest by talking to Commander Denulth north-east of the Burthorpe lodestone, inside the building. Ask him if he has any quests available and he will inform the player that Trolls have taken over Death Plateau and that his men cannot remove them. He says the trolls have been pushing hard and that they need to act before the trolls start sending in forces. He explains that the path up is blocked by Thrower Trolls and that he wants to find another route up. He will inform you of a cave past the defensive wall where a Dwarf named Sabbot lives. Accept helping him to begin the quest.

The Dwarf in the Cave

Head north-west along the road and through the defensive wall to the west (through the hole where the Wall guard stands, not via the door, which is locked). From the wall, head northwest from the Warriors' Guild and into a cave (marked on your minimap with a red arrow icon). Head north inside the cave and talk to Sabbot.

Tell him that an alternate route needs to be found and he will insist that it is not his problem. Tell him that you will not move until he helps and then keep saying "Fine!" until the dwarf gives in. He will explain that the best way to get up the pass is by going under the rocks by breaking into a natural cave. He will explain that his wife, Freda, has some notes that will help. Freda lives in a house to the west, along the path.

From Sabbot's cave, follow the path to the West until stumbling upon a T-intersection. Do not go north on this intersection as there are trolls which will attack you. Take the path west then travel south until you see Freda's house.

Talk to Freda and the player will ask for the surveys she and her husband created. The player will tell her that they need the survey so that the Burthorpe Imperial Guard can ambush the trolls. She says she can start on the survey when she gets back from town and that she needs to dig out the information from very technical terms. She explains that she needs to go to town to get her climbing boots re-spiked. Offer to help and she will tell the player to see Dunstan in a house East of Burthorpe Castle in order to get her boots respiked.

Use your home teleport to get back to Burthorpe. Head east past the Burthorpe Agility Course and then run directly north. Talk to Dunstan who will be outside and ask him to put fresh spikes on the boots. Dunstan will tell you that these are Freda's boots and your character will tell him that she told you to get them respiked. He will repair the boots which the player then needs to bring back to Freda. Note: If you happen to have your own pair of climbing boots with you too, you will lose both pairs.

Go back to Freda, and then give her the re-spiked boots. She will give the player a survey. Read the survey and then talk to Sabbot back in his cave.

Mine the Western 'rockwall' in Sabbot's cave. Enter the cave and Sabbot will give the player four rabbit sandwiches. Inside the cave there will be several obstacles that you must overcome. You may take some damage from them. Jump down the cliffside to the south and proceed east to a gap (marked by a green arrow on the Minimap). Go through the gap, to the east and then jump the crevice. Head all the way south and swing across the rope swing hanging from the vines. Proceed west and jump the stepping stones. Then go through the gap to the south.

Finally, climb the cliffside to the south, then go east and south over the agility obstacles then climb the cliffside and exit the cave. A cutscene will play where the player talks about ambushing the trolls while a troll named The Map walks up to them. Talk to The Map and say "Prepare to die troll". The Map will then attack you. He is weak to water spells and is extremely easy to defeat, only having 100 life points, and he rarely hits high. Once he's dead, you should return to Burthorpe via the Home Teleport spell.

Note: The Map will not be registered as killed if you are in a group.

Talk to Commander Denulth. The player will inform him that they found a good spot to ambush the trolls. A cutscene will occur where the player directs an ambush against the trolls on Death Plateau. Denulth will remark on how well the ambush went and the quest will be completed! 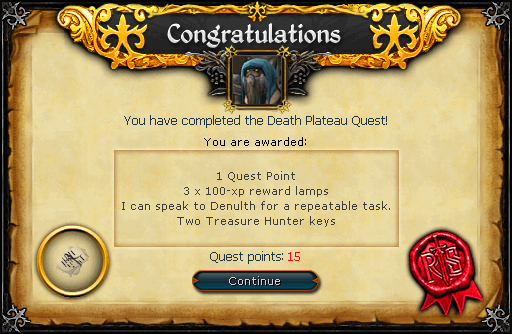