Death esswraiths are a type of esswraith found on the upper floor of the Runespan. They can be siphoned for death runes, requiring one rune essence and giving one death rune and 60 Runecrafting experience for a successful siphon; an unsuccessful siphon will give no runes, consume no essence, and give 0-2 experience. They require level 65 Runecrafting to siphon. You can absorb 5 death runes before the esswraith dies, leaving 50 rune essence. However, if the player stopped siphoning before the esswraith was drained, they will not receive any essence. They respawn every 5 seconds.

Death esswraiths can also be "chipped" for rune essence. By using 10 nature runes on the esswraith, you will receive 10-20 rune essence. However, the same esswraith cannot be chipped twice in a row; you can't chip the same creature until you have chipped three other Runespan creatures of any type.

Death esswraiths cannot be found on the lower floor.

Death esswraiths cannot be found on the middle floor. 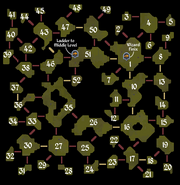 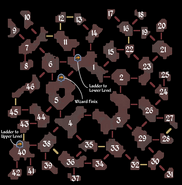 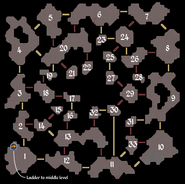 Retrieved from "https://runescape.fandom.com/wiki/Death_esswraith?oldid=24564713"
Community content is available under CC-BY-SA unless otherwise noted.