RuneScape Wiki
Register
Don't have an account?
Sign In
Advertisement
in: Items that are reclaimable on death, Grand Exchange items, Tradeable items,
and 8 more
English

This is the current revision of this page, as edited by PiscinePanzer (Message Wall | contribs) at 18:13, 8 April 2019. The present address is a permanent link to this version.
Revision as of 18:13, 8 April 2019 by PiscinePanzer (Message Wall | contribs)
(diff) ← Older revision | Latest revision (diff) | Newer revision → (diff)
View source
RSCOS
This article is about the rune. For other uses, see Death rune (disambiguation).

Death runes are used in great amounts by mages that cast Ancient Magicks, as they are needed to cast the different varieties of the rush and burst combat spells. Death runes are also needed to cast the level 85 spell Teleport Block, the only free-to-play spell which requires death runes. Members can create death runes using the Runecrafting skill at level 65 at the Death altar in the Temple of Light after completing the quest Mourning's End Part II.

Adult cats can be exchanged for 100 death runes with a Civilian in West Ardougne or 200 death runes while possessing the Ardougne cloak 1 or better (Works even if it is still in the bank).

250 Death runes (along with 750 Air runes) can also be obtained from any Slayer Master for 35 Slayer points after completing the Smoking Kills quest. 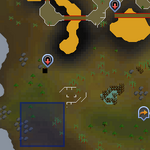 For members there is a death rune spawn in the Feldip Hills. It respawns 1 minute and 45 seconds after picking it up.

The only use for death runes in free-to-play worlds is casting the Teleport Block spell. Despite no free-to-play spells requiring Death Runes in Daemonheim, they can still craft them.

These spells can only be cast by members:

** Part of the Lunar spellbook and can only be cast by players who have completed the Lunar Diplomacy quest and have switched their spellbook to Lunar Spells.