You can replace this by speaking to the Easter Bunny.

A map of RuneScape with three locations marked upon it.

Delivery map was a map given to the player by the Easter Bunny at the 2010 Easter event. The item was given along with a Delivery box. The map showed the locations of the three couriers that players had to deliver items to during the event. The Courier was found in Falador centre, The strange courier was found near a bridge in Lumbridge, and the Goblin courier was found at the entrance to the Grand Exchange in Varrock. Quest start point icons (see World map) were used to show the courier's locations. 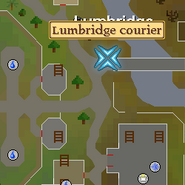 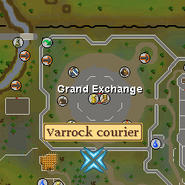 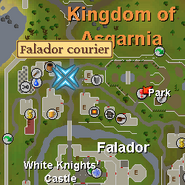 Falador Courier location
Click an image to enlarge
Retrieved from "https://runescape.fandom.com/wiki/Delivery_map?oldid=24543606"
Community content is available under CC-BY-SA unless otherwise noted.