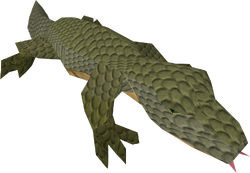 Desert lizards are big Slayer monsters found in the Kharidian Desert, and are mainly around the south-east where it says lizards on the map. They require level 22 Slayer to kill, and can be aggressive to lower level players. Ice coolers are required to finish them, which can be bought from any Slayer Master. Or an ice shaker, bought from any Slayer Master and placed on the tool belt, can be used in place of an ice cooler. The ice cooler will be destroyed when used, so multiple coolers are necessary for slayer trips. The lizards are found in areas affected by desert heat, so players are advised to bring a water source to avoid the negative effects of the heat.

Desert lizards can be assigned as a Slayer task by Vannaka, Mazchna, Turael/Spria and Sumona. Level 21 small lizards and level 77 lizards may also be killed for a desert lizard task, and all are found in the Kharidian desert. The larger lizards will provide more experience on a task, so may be preferable.

If you are looking for special bones of the Rag and Bone Man's Wish List, you should attack the regular lizards (the big ones) and not the Desert Lizard.

They are located in the Kharidian Desert north of Nardah. The fairy ring code DLQ is the best way to reach them. There are some just north-west of the ring (along with snakes).

Another way to get to them is to go through the Shantay Pass, head south-east and cross the river at the first bridge.

Ice coolers must be used on them when they reach 1-30 life points in order to kill them. If an ice cooler is accidentally used when there is more than 30 life points, it will still be used up but have no effect. Players would be wise to bring a few extra because of this. Waterskins (and a means of filling them, such as a knife for cutting cactus or Humidify) or an enchanted water tiara should be brought to avoid dying in the desert due to the heat. Desert clothing may be useful if you can afford to fight without decent armour. Magic attacks appear to be effective, particularly fire spells, although melee works well enough; stabbing weapons are most effective.

If on a task, Level 110 lizards should be killed for the most experience, as they have more life points. These can be found near the small lizards. These drop big bones, so more experience in Slayer, combat, and Prayer is gained than with the smaller lizards. Killing small lizards will allow you to complete the task more quickly, however.

Lower level players can kill them without taking much damage by using cacti to safespot them.