Start a Wiki
OS
This article is about the bird called Desert phoenix. For other uses of phoenix, see Phoenix (disambiguation).

North-west of the Ruins of Uzer

Definitely not a chicken. 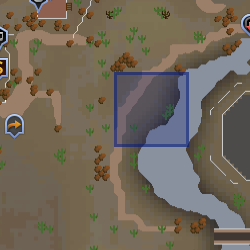 The Desert Phoenix is a bird that can be found flying along the west bank of the River Elid in the Kharidian Desert, north of the bridge to the Dominion Tower and the northeastern part of the desert. It is located in the area where the river flows through a small gorge. The phoenix can be plucked with 25 Thieving to retrieve a phoenix feather, which is a component in Super antifire potions. Stealing a feather grants a player 26 Thieving experience.

The Phoenix feather should not be confused with a Phoenix quill, a tertiary component for Phoenix and reborn phoenix pouches. Phoenix feathers are tradeable to familiars, but not to other players.

During The Golem quest, players must steal one of its feathers and use it with Black mushroom ink to create a phoenix quill pen. Before completing the quest, it is only possible to collect one Phoenix feather at a time.

One way to get to the phoenix quickly is to use Fairy Ring code DLQ (after Fairy Tale III or Fairy Tale II with a lunar staff) and run northwest, cross the bridge near the Dominion Tower, and run a short distance north from there. Another method is to use the broomstick teleport from Swept Away, banking at the Shantay Pass bank chest and running directly east out of the gate. This method can produce 800-1200 feathers per hour. The Dominion Tower on the right of the bridge can be used to bank making it the closest bank, but a combat level of 110 is required to access it.

After completion of the elite Desert Tasks, players retrieve two feathers instead of one when plucking the phoenix. The desert amulet 4 does not need to be equipped in order to retrieve more than one feather.

The Desert Phoenix's damage decreases as your health goes down.

Retrieved from "https://runescape.fandom.com/wiki/Desert_Phoenix?oldid=24563256"
Community content is available under CC-BY-SA unless otherwise noted.