You can reclaim this item from the Loyalty Shop.

An aura that generates charge once per day, allowing you to commune with the Desert Pantheon Gods. It will gift you a boon of your choice.

The desert pantheon aura is an aura that was available with the 2016–2017 Premier Club. The aura became unusable after 31 December 2017[1], except for users who purchased Premier membership after 31 December 2016, who were able to continue using the aura until the last day of their Premier membership (i.e., sometime in January 2017). During 2017, losing your membership status, regardless of whether or not you regained it, would also result in the aura becoming unusable. Upon attempting to use the aura in its unusable state, the player will receive a game message that reads, "You no longer hold the power to commune with the Desert Pantheon Gods."

While it was active, the aura generated 250 charges each day, and could store a maximum of 500 charges. Unlike other auras, the pantheon aura's daily recharge didn't happen until you logged out and back in. The charges could be spent on any of the benefits listed in the table below. 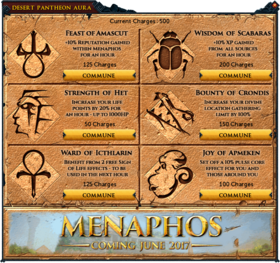 In contrast with other auras, the pantheon aura could grant its effects to the player even after being unequipped (after initially triggering them), allowing players to use it with another aura.

The Wisdom of Scabaras effect could not be used during double experience weekends. Upon attempting to commune with Scabaras on a double XP weekend, the player would receive a message in the chatbox reading, "Double XP is already active, you don't need to activate this aura."

Prior to the release of Menaphos, Amascut's benefit was unusable, as in her absence from Menaphos her power had been "dissipated" from the aura. Amascut's effect was released along with Menaphos on 5 June 2017, but was not usable until 12 June 2017.

Unlike most auras, it is not found in the Aura management interface and is instead an item that is equipped in the aura slot.

Retrieved from "https://runescape.fandom.com/wiki/Desert_pantheon_aura?oldid=24559900"
Community content is available under CC-BY-SA unless otherwise noted.