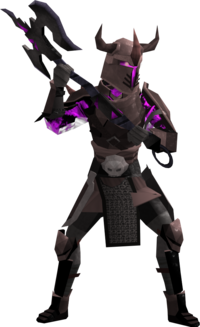 Dharok the Wretched (abbreviated by some players as DH), is the second oldest of the six Barrows brothers. Like most of the Barrows Brothers, he attacks with melee, using his greataxe. Dharok attacks at a slower speed than his brothers, but when he is at low health he can hit extremely high and thus he is considered by most players to be the most dangerous of the Barrows brothers.

Dharok's set effect; Dharok's Might, causes his average damage dealt to be increased as he loses life points. This causes him to hit upwards of 3000-4000 when at low life points. Therefore it is incredibly important for a player to watch their life points as well as prayer points (if using protection prayers - Highly recommended) and to eat food whenever necessary. Protect from Melee/Deflect Melee are also recommended when fighting him, as they can block up to 50% of damage he inflicts, reducing the maximum hit to around 1000-2000.

Dharok is fought in Barrows: Rise of the Six.

Dharok, along with his brothers, lived on a small farm. He was somewhat haughty, having bullied others when he was young. Eventually, his younger brother Guthan convinced him to join the crusades. Dharok initially opposed the idea, as he believed that maintaining the farm and feeding the crusaders was enough "glory" for him.

During the 2016 Easter event, Dharok the Wretched and his brothers play a role as the workers (bobble-numbskulls) of Sliske's chocolate factory. They resembled their bobble-head versions.

During Kindred Spirits, Sliske subjects Dharok into a "game" where he is constantly forced to fight endless waves of Saradomin crusaders, much to his reluctance. The player, who is forced to play along to save Meg, Rancour and Linza, speaks with Dharok about the fights. The player can either decide to help or torture Dharok. If they torture him, they release a white knight champion which quickly kills him. If they help him, the player asks Dharok to "die" to the crusaders. Even though Dharok is somewhat concerned about their decision, he listens to them.

Afterwards, if tortured, Dharok is upset with the player's actions for devastatingly crushing him in battle. If helped, Dharok thanks the player, now knowing what it meant to feel the retribution of his victims on him.

He asks them to save Ahrim while he accompanies the rest of the group. When the player escapes Sliske's vault, Dharok gives his thanks again (along with his fellow brothers), as they feel that Sliske's control over them is weakening a bit. He and his brothers promise to help the player when the time is right, and for the time being, pretend to be fully controlled by Sliske before returning to his tomb.

Dharok, along with his brothers, appeared in Sliske's Endgame, being the second intended wave in Sliske's attempts to destroy the World Guardian. However, the Barrows Brothers had managed to regain a modicum of control over their own actions, and chose to aid the World Guardian, attacking Sliske's wights and champions.

Dharok does not drop his main rewards directly; instead, his equipment is added as possible rewards from the Barrows chest. See Barrows#Rewards for more information. However, Dharok can directly drop the following items.

A picture of Dharok the Wretched.

Artwork for Dharok as a wight.

The new model for Dharok's armour revealed at RuneFest 2011.

Shadow Dharok wearing a Santa hat during Christmas.
Click an image to enlarge

Retrieved from "https://runescape.fandom.com/wiki/Dharok_the_Wretched?oldid=23452710"
Community content is available under CC-BY-SA unless otherwise noted.