Diamond in the Rough, released on 26 September 2012, is one of the two novice quests featuring Ozan in Al-Kharid's graphical update. It is available to members only.

Stealing the Diamond Yet Again

To begin, speak to Osman directly after finishing Stolen Hearts while not having a follower or pet following you. He will instruct you to speak to Ozan, who is located directly outside the palace. If you previously completed Stolen Hearts on a Free-to-play account, he will also give you the Agility and Thieving lamps from that quest. After talking to Ozan a cutscene will begin where Osman provides instructions in rescuing Prince Ali. Once the cutscene is over, Ozan implores you to take the heavy weight (from the Het scales in front of the statue) and to leave once again (via the rope).

From the top of the castle, drop down from the roof and return to the bank via the rope Ozan fired during the previous quest. Perform an "eagle jump" into the cart south of the bank, then run to the Shantay Pass.

If you try to use the Al Kharid Lodestone teleport a message will pop up saying "The diamond vault appears to have a teleport block on it." However, you can use the Al Kharid Lodestone teleport once you're out of the vault and on the roof, Ozan will follow you. Do NOT use an amulet of glory teleport, this will result in a glitch and you will have to make your way back to the top of the palace.

When you attempt to pass into the desert, the diamond will speak through Shantay and say that its scared. Shantay will give you four waterskins.

Once in the desert, Ozan will ask you if you wish to continue (you can ignore the other chat options, or run through them). Respond in the affirmative and the Kharid-ib will be open and make a screeching sound. A sundial will appear which guides you to your destination. In order to discover the destination, get the dial to align with the symbol the sundial is associated with. For instance, Het is human, so point the dial towards the human face.

Follow the ray of sun South West and a cutscene will occur at the next dial, where bandits will ambush you and the diamond will speak through one of them. Dispatch the bandits and their king to continue (they will drop tuna and waterskins which may come in handy - note that the battles are instanced, so one cannot pick these up once the sundial gnomon has been picked up). The leader of the bandits drops a sundial gnomon which was missing from the Apmeken sundial. Use the gnomon with the sundial and point towards the head of the monkey, then run north-west after the dialogue with Ozan. There is currently a glitch where you cannot pick up the sundial gnomon by itself and you MUST have enough free spaces to Loot All as if you try to pick it up individually you will get the text "This item appears to have already been taken." Also note that ALL items you drop to make space for the sundial gnomon will disappear after picking up the sundial gnomon.

Note: Once you head north-west to the other sundial, Ozan will talk. Clicking outside of the chatbox will send you back a few steps. 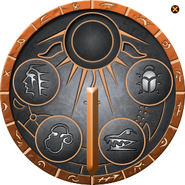 A figure emerges from the sand...

It's the bandit king!

Attack of the bandits!
Click an image to enlarge

At this sundial location, another gnomon will appear, but this time you and Ozan will be stuck in quicksand. Exhaust all the options trying to escape, none will work. You will be transported into a small cavern and momentarily stunned, while a critter scurries away with the diamond (which must have fallen from your inventory). Inside the cavern is the sundial of Crondis. Ozan complains about his injured leg and sends you off to search the tunnels in solitude. Enter any tunnel, and you re-emerge in the room with Ozan. After a few rounds of Ozan joshing about this, it becomes apparent Ozan is sitting on the sundial gnomon. Once again, inspect the sundial (Crondis having a crocodile head) and follow the sunbeam. In the tunnel Ozan once again complains about his injured leg, so you are unable to run.

At the end of the tunnel you arrive in a pitch-black room. Eventually Ozan discovers a torch, revealing that the room is infested with dung kalphites. You must recover the diamond from the dung the kalphites are rolling around by left clicking them. Ozan will aid in slicing open dung kalphites also. If you don't have a suitable weapon, there's a bronze scimitar spawn in the room. After you have sliced a few of the wrong kalphites, which may yield tuna or bronze equipment, or nothing, Ozan will start shouting whenever he sees one which is sparkling. You'll find successively a sapphire, an emerald, a ruby, and then the diamond itself. Picking up the diamond may put you back on the surface above the quicksand, you must go back down to continue the quest.

A hole will appear in the ceiling through which Leela will talk to you and Ozan, aiding your escape from the cavern. Navigate the discussion between Leela and Ozan, then point the sundial towards the insect.

Note: The diamond cannot be picked up using the Loot All option and must be picked up by right clicking it with no other loot on the ground, meaning you must clear all loot from the ground nearby first before attempting to pick up the diamond.

Follow the sun beam for the final time towards "the lion's mouth": the ruins of the Temple of Amascut. Once here, speak to Lady Keli to initiate a cutscene. Lady Keli demands the diamond. If you refuse, Lady Keli becomes increasingly belligerent, threatening to kill all present if they do not comply. Whether you say yes or no, the diamond inveighs against its surrender through Keli's guards, though you are eventually swayed into delivering it to her. Lady Keli protests at being called crazy and reveals she is Amascut. Before departing, she sets her guards on you, Ozan, and Leela.

They both have a damage cap of 50. Apep yells out "Whirling Dervish!". If you do not run away from him during this attack, you are briefly stunned and knocked back (somewhat similar to the dragon spear's special). Avoiding this attack can be made easier by installing the Escape ability on your action bar. Heru may blind you with his shield, but is otherwise a fairly simple fight.

NOTE: Certain forms of passive damage, such as the effect of the Blood Amulet of Fury, will ignore the damage cap.

Amascut leaves via tornado
Click an image to enlarge

Once both guards are defeated, click on Prince Ali to rescue him and initiate another conversation. You will be returned to the Palace at the end of it with the prince and Leela, and Ozan goes off to recover the diamond. Osman and Leela will argue and then a cutscene featuring Amascut's plotting (with Jabari's complicity) will display. Quest complete! 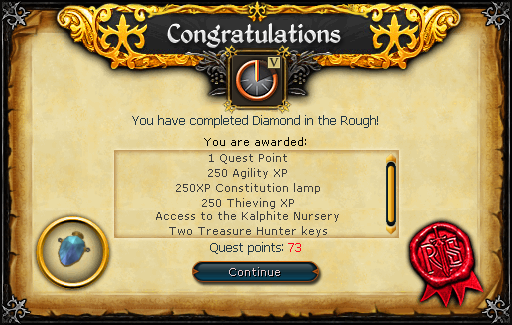 Diamond in the Rough complete!

(boosts may be used, must be visible) can mine a crack in the room below the quicksand for 20,000

experience (plus bonus if the mining suit is worn) and access a secret treasure room, which contains a Scabaras mask and a Was (sceptre). To reach the fissure room, go down the well (north-west of the Kalphite Lair, fairy ring BIQ) and go in the tunnel in the east wall of the Kalphite nursery. Then go through the tunnel all the way to the other side and enter. You will find yourself in the room below the quicksand. Please note that the golden mining suit, golem outfit, bonus experience, all increase the experience received from mining the fissure.

Completion of Diamond in the Rough is required for the following: