For the jar talk to Ernie upstairs in a building south of the east bank house with pottery symbol in New Varrock. Before giving you a jar, he gives you a cooking urn which you must fill. Go outside and chop the dead tree nearby for some logs. Travel north-east to the zombie cow pen and kill roughly a dozen cows – the exact number of undead meat needed varies from player to player. Pick up their undead meat, chop down a nearby (dead) tree, light a fire inside of Ernie's house, and cook the meat.

Making the orange and purple mist

Fill in the code using the decoding strips and the code you got from Zemouregal's desk to unlock the door. Enter the vault to obtain the heart of Arrav. Returning over the light beams has no requirements. Return to Arrav to show him the heart. 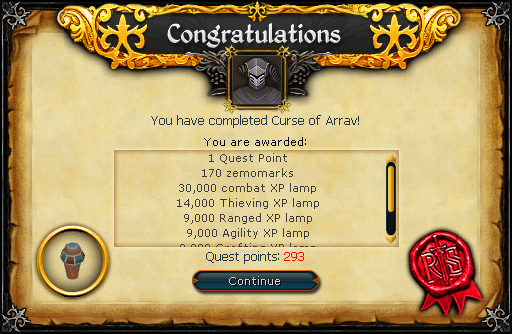 Retrieved from "https://runescape.fandom.com/wiki/Dimension_of_Disaster:_Curse_of_Arrav?oldid=22037274"
Community content is available under CC-BY-SA unless otherwise noted.