Start a Wiki
For other uses, see Demon Slayer (disambiguation).

Demon Slayer is a subquest of the Dimension of Disaster quest.

Speak to Gypsy Aris in New Varrock square. She tells you that you've got a future ahead of you, but you tell her that you already know that your future was to kill Delrith. She tells you that you need Silverlight to kill Delrith. You will recall from your first time killing Delrith that that Gideon Bede or Sir Prysin has the key to Silverlight. Gypsy Aris will tell you that Gideon Bede is dead, but that Sir Prysin now lives in a house north-west of the church.

Go to Sir Prysin's house, and ask him about the key you need. He says he had the key, but lost it. The key is in a random hiding spot inside, upstairs, or right outside the house in the drain to the south, and reappears in that location in further playthroughs. Go to the church and go down the trapdoor to the south-east of the entrance. Silverlight is covered by a barrier, without the 3 spirit guardians. Click on the barrier, and then go back to Gypsy Aris, and tell her about this barrier. She will tell you that the guardian spirits have moved on, and you'll need to find them. She gives you a device. The ghosts are located in these locations, and you can visit them in any order you wish to. It is recommended that you go to the Spirit of the Mind ghost last, as he is closest to the church.

Spirit of the Body

Return to the Apothecary. He'll take your ingredients and make the potion. Go back to Dr Harlow. If you try to give the potion to him, he'll refuse it. Buy a glass of beer from the bartender. Use the potion on the glass of beer, then give it to Dr Harlow. The ghost will get out of his body, and Harlow gets angry at you for sobering him up. Talk to the ghost. He'll tell you that he wants you to kill anything in the bar. Alternatively, you may also ask him to kill yourself instead (you will not lose anything). Talk to the ghost again. He's happy, and tells you that his barrier is lifted. A short cutscene of his barrier disappearing will play.

Go to the graveyard, north-west of Gypsy Aris' tent, and go to the north side, next to the statue of Zemouregal. There are a stack of tombstones that can be investigated. One of the three ghosts will pop out. Talk to him. He tells you to simply take a step to the right. If you ask him if it's your right or his right, he'll tell you he doesn't care. Simply take a step to the left or right, and talk to the ghost. He is satisfied (or bored) and lifts his barrier.

Spirit of the Mind

Go to the final ghost, in the house south of Sir Prysin's home. You'll see a bookcase moving at the south wall. Investigate the bookcase. An animated book will fight you. Kill it and the final ghost will appear. He asks you some trick questions, all options will work (since there are no true 'answers' to his questions). After that, he lifts his barrier.

You can now go back to the crypt underneath the church and take Silverlight. Go to the south-east part of the city. If you try to go through the barrier, Evil Dave won't let you for not being in his "evil" cult. To get in, you'll need to have an "awesome black weapon and robes". There are some black mushrooms nearby Evil Dave, so grab one and use it on Silverlight. To get black clothing, go to Thessalia and buy some black robes from her, which will cost 90 zemomarks.

Talk to Delrith. He actually wants to be defeated and go back to Infernus. He'll ask you to simply stab him. You will automatically stab him, but a bolt of lightning will deflect the attack. Delrith tells you that that was Agrith Naar, and asks you to draw a blood circle. Get a vial, which you can find in the General Store, and fill it by a blood fountain, which you can find north of the Varrock Herald, at the steps up to Varrock Castle. Go back to Delrith. Your character draws the blood circle, and stabs Delrith.

After this, Delrith disappears and Agrith Naar takes his place. Agrith Naar gets angry at you for sending him back to New Varrock and wants to fight you. If you're ready, you can accept. If not, you should gear up on some food and armour. If you're ready, fight Agrith Naar. Agrith Naar attacks with magic and melee, as he did in Shadow of the Storm. He is also capable of telegrabbing you if you try and fight from a distance.

After his health has been lowered a bit, he will begin to use a special attack similar to the one Delrith used in Demon Slayer. He'll scream "PREPARE TO BE INCINERATED!" and begin to charge an attack which does a massive amount of damage; run outside the circle of blood to avoid it. Resume fighting him after this.

After reducing his health again, he will summon four lesser demons. These won't attack you, but similarly to a Flash mob, they will stand there and heal him. However, Agrith Naar heals from all four demons at once in intervals of 50 life points. The demons are fairly weak, only having 600 health but should be killed as he is invulnerable to attacks while they are alive.

Finally, as his health is lowered even further, he will use a final special attack and will scream "PREPARE TO BE INCINERATED" again. As before, just run a safe distance, then resume fighting him until he dies, and Silverlight will be upgraded into Darklight.

After finishing him, it is recommended that you loot the nearby chest in order to work towards completing the "Pick All" task.

After you have killed him, go back to Gypsy Aris, and she'll tell you that Delrith and Agrith Naar weren't much of a threat anyway. She will still reward you for your troubles. 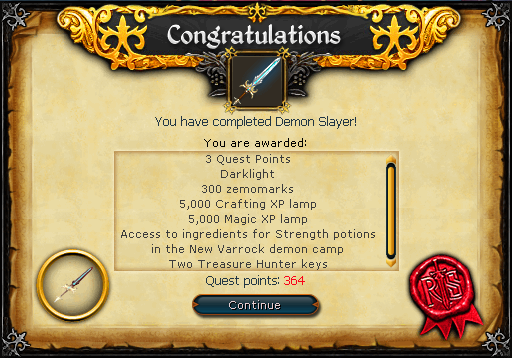 Retrieved from "https://runescape.fandom.com/wiki/Dimension_of_Disaster:_Demon_Slayer?oldid=23352398"
Community content is available under CC-BY-SA unless otherwise noted.